Honestly... You Can't Do It Alone

May 2010
Josh and I had made a very extensive list of things to get done before we moved in. I think we got about 50% of the list done before the fateful moving day.  I ended up taking a few days off work just so we could get some smaller projects off the list.  While we were packing, painting, and stressing, we had hired Nolan to come in and replaster our front two rooms.  The original plaster had some big cracks, hundreds of nails and screws and a few areas of water damage.  It made sense to get a fresh lease on life.  Nolan was amazing!  We showed him some pictures of the plaster work from our old apartment that had a light texture to it.  He got really close and worked long hours for us to make sure it was done before we moved in.  He also dutifully abided our 'careful on the floors' cautions and wore his slippers the whole time! 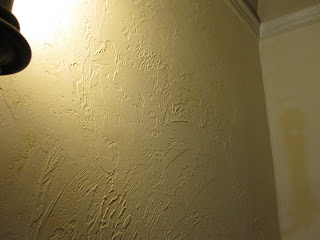 Nolan worked while I bleached and cleaned three closets and set about painting them. If you have ever had the pleasure of painting a closet, especially ones that are not walk-in's, you can feel my pain.  I spent two days in 2 sqft areas, usually on a chair, painting the closets and more often myself in the process.  In the meantime, Josh was experiencing the joys of painting ceilings as quickly as possible before our furniture was moved. 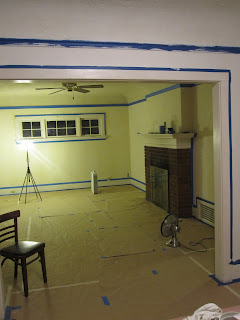 The weekend we moved in our friends came over for a small work party. Together they helped us with some tasks that were daunting!  Jen and Zack mowed our lawn (neighbors rejoiced) and leveled out a large dirt patch in our parking strip that was left from the new sewer.  Dean carefully cut cork liners for all our kitchen cabinets (yay!) and Dana helped me clean what might have been the scariest broom closet in history. 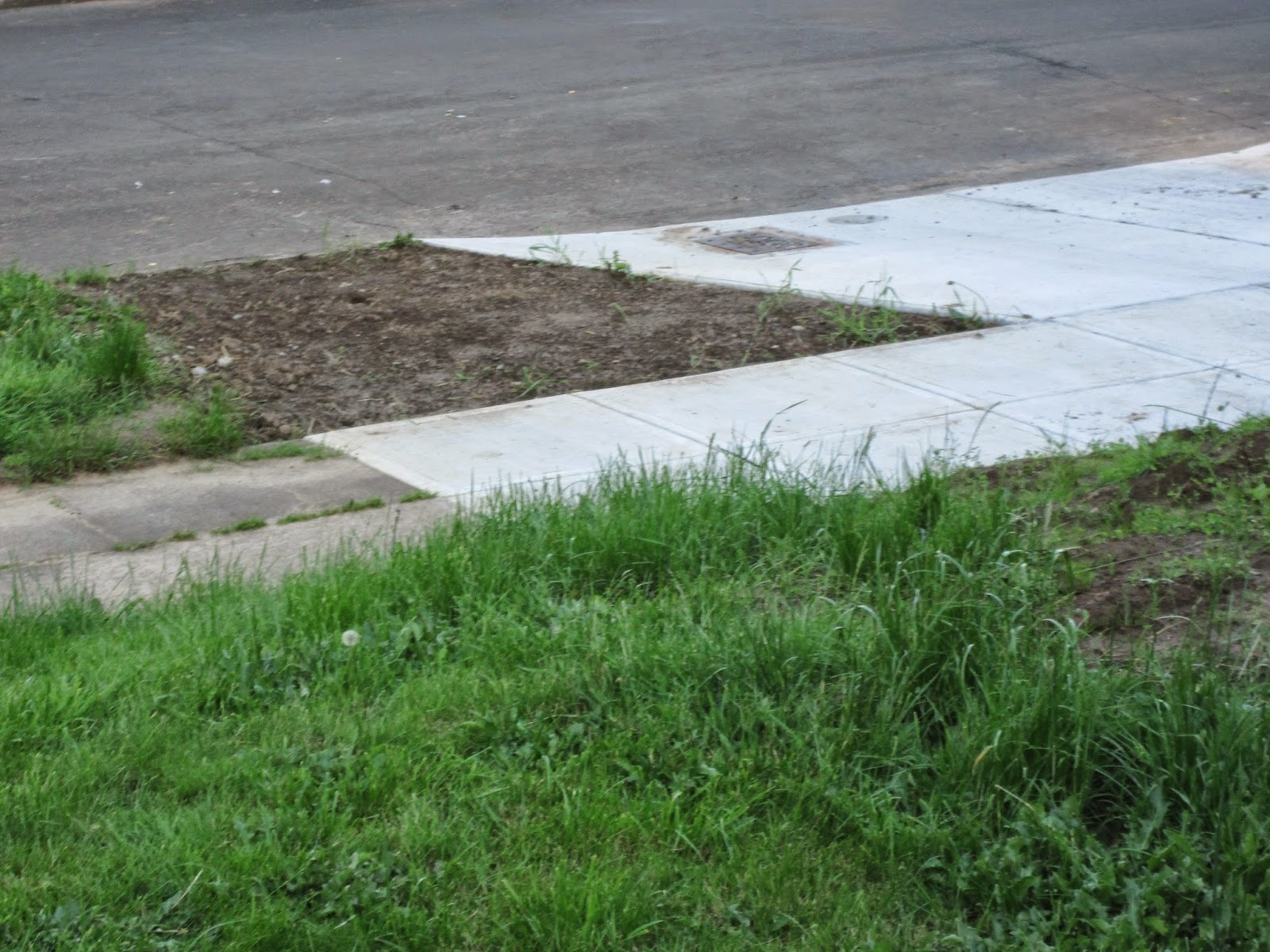 All in all, I can sum up this entry by saying... you can't ever do a project alone!  There are moments that you have to pay someone because their talent is definitely required, and other times when friends are willing to step up and help you when you need it most.  Josh and I have a lot of pride and don't like to ask for help, but we never could have gotten here without help and encouragement from everyone.

May 2010
For the next 6 days we officially owned a house, but were not able to enter it.  The flooring guys came and worked their butts off but we were breathing down their necks.  There was a list of things that had to get done before I was willing to move into that house and we now had only two weeks until move out day in our apartment. 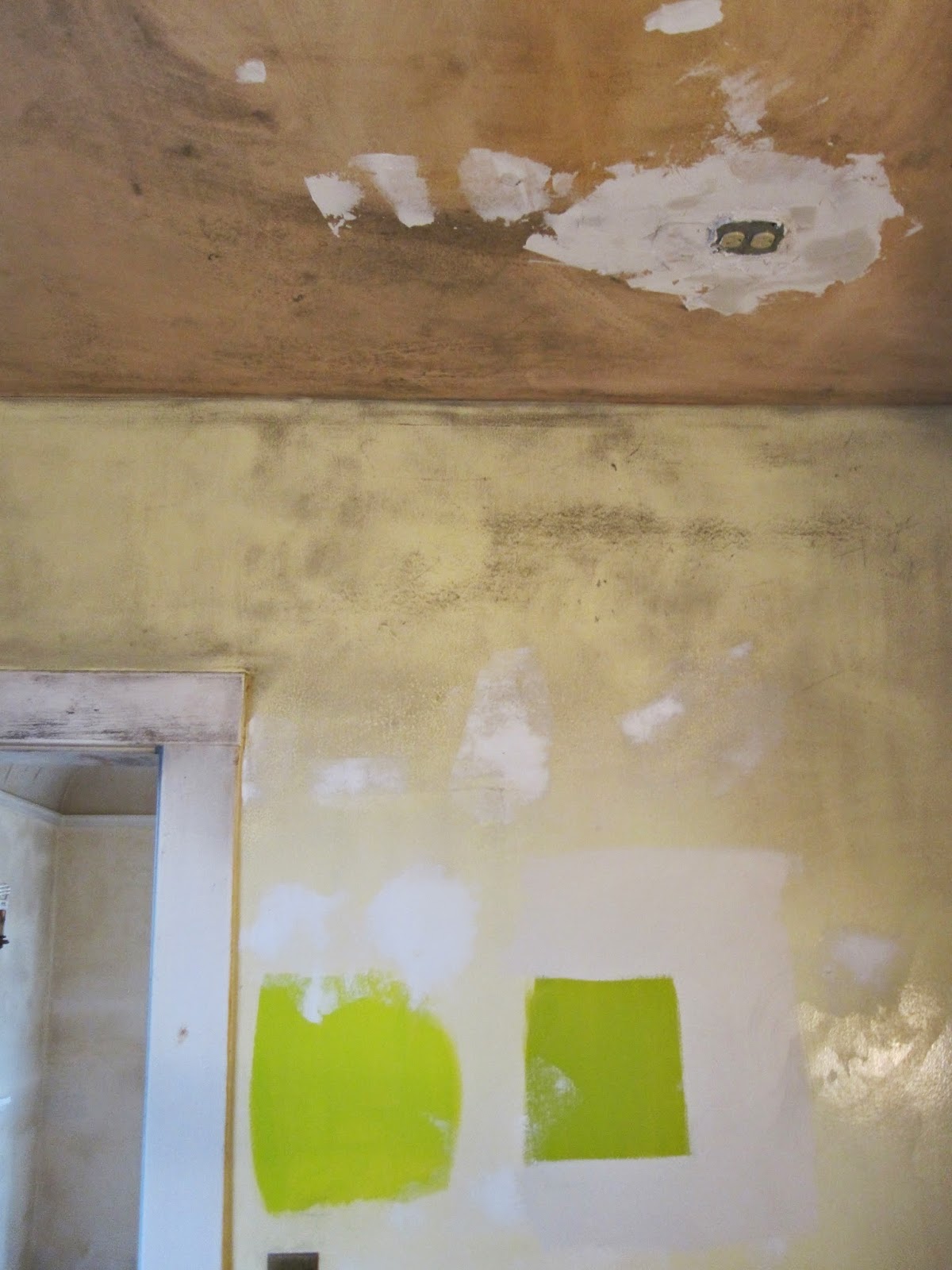 Kitchen was #1:  My first job was washing the walls.  There appeared to have been a small but smoky stove fire that had left everything in the space with a grimy layer of soot.  Josh and I both agreed we wanted a fresh green kitchen, however, our bold choice of Eccentric Lime was probably due to the depressing dinge of the original walls. 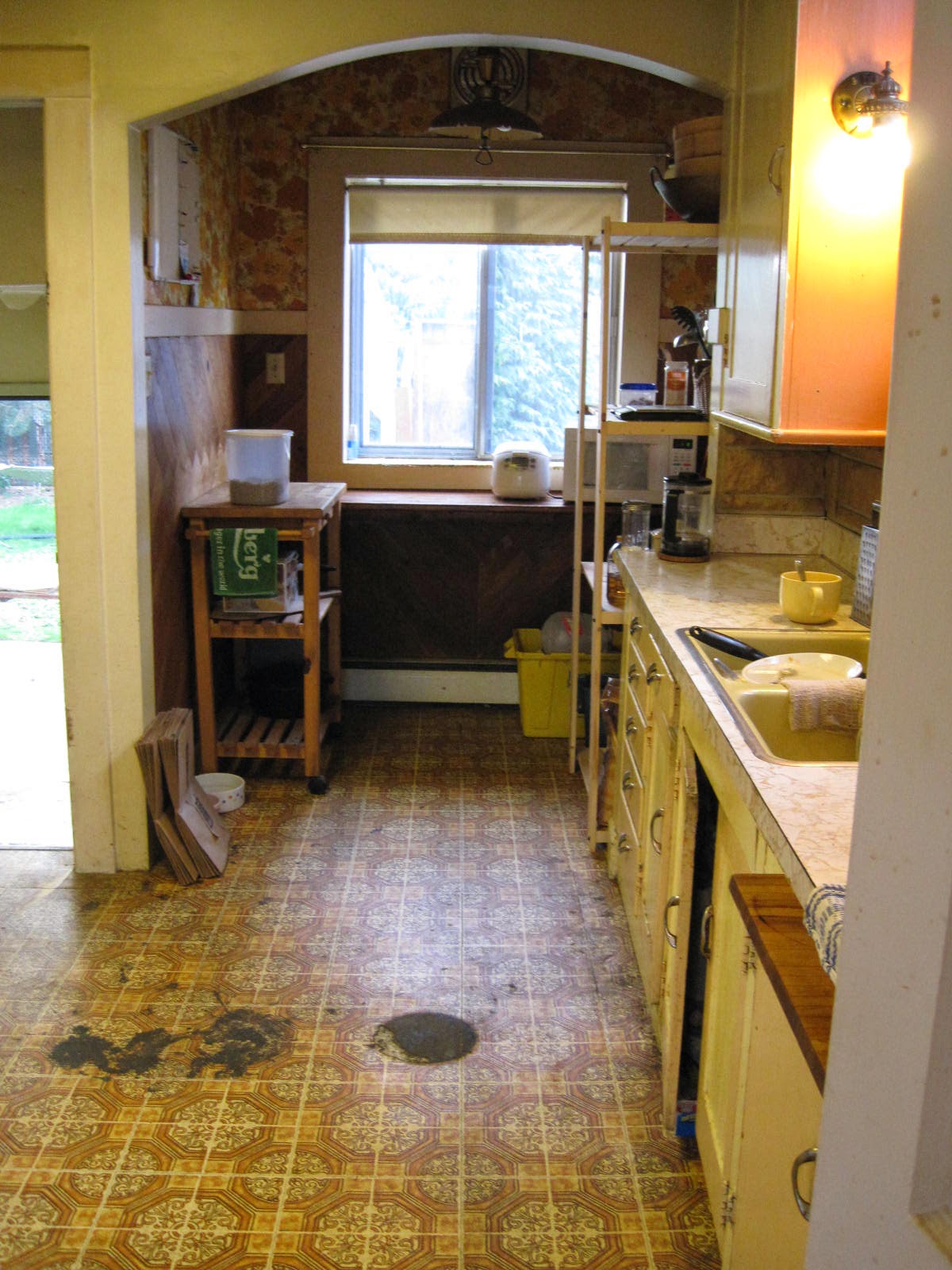 Everything in the house is lead, that is the truth, you really can't expect anything less in a house of that age. My take on it is: encase it, and don't allow toddlers to knaw on your wood work.  Everything required a thick coat of white oil primer, thank god for kilz!  It is pretty much the wrapping that protects us from our house's true inner dirt.  Before we could prime we also had to remove some AMAZING vinyl floral 70's wallpaper that I honestly wish we had kept as a souvenier.  Josh set about that task and I went about removing the 2-3 layers of contact paper that covered every cabinet. We scrapped for two straight days, it was mind numbing. 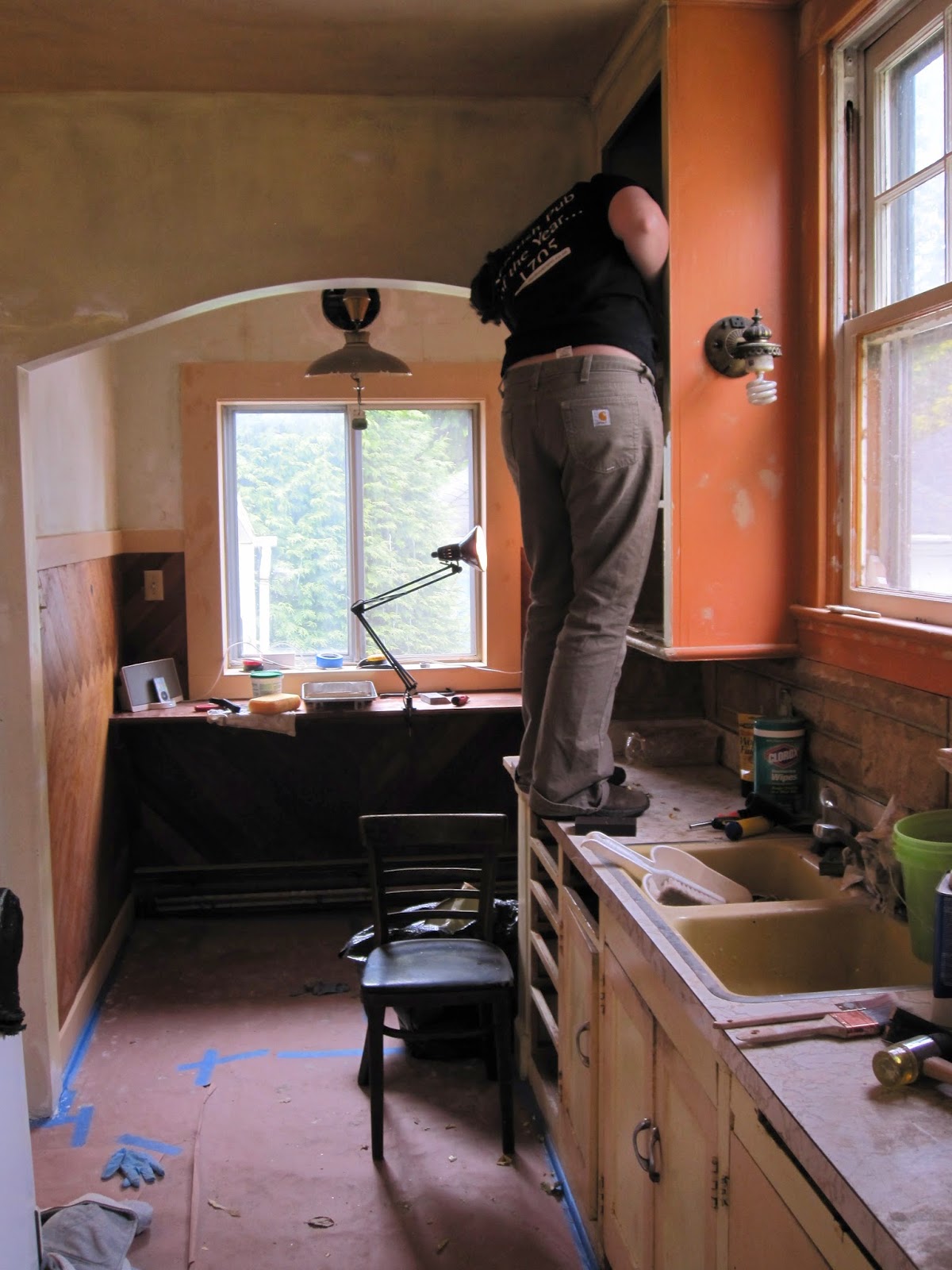 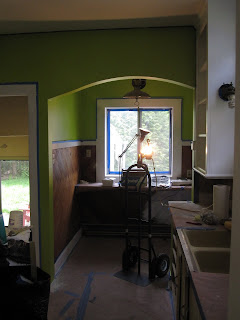 In the end, everything took three layers of paint on top of the primer.... so yes that is four coats of paint.  This process took a very long time and the cabinets required endless patience with a wee roller. We were painting the kitchen LONG into our move in process.  Which meant we 'camped' for about 2 weeks before we could unpack everything.  The kitchen would become and continues to be a daily struggle for me.  You will see more blog entries about this kitchen then you ever thought possible.
Posted by Taylor at 9:11 PM No comments:

May 2010
So Josh informed me he had better pictures of our first night ripping up the floor.  Who knew?  Apparently not the person who lives with him and was in the pictures... But here it is, the moments of zen.. 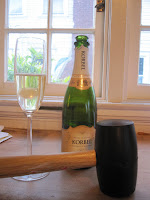 This blog already appears to be enlightening more about the process.
This was how the floor looked after we removed two layers of linoleum and a layer of particle board. Check out the original handpainted floors, we wish we could have restored them! 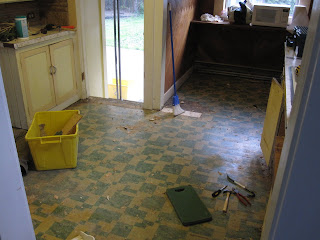 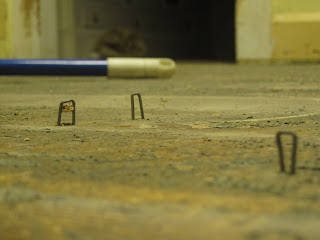 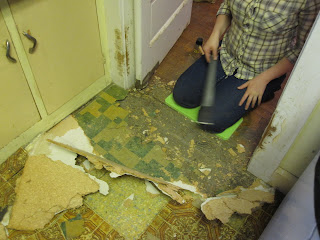 Most people would NOT do this 4 minutes into owning their own home.
Posted by Taylor at 8:29 PM No comments:

After weeks and weeks of delays we finally closed on the house and received the keys on a Wednesday.  It was pretty anti-climatic to be truthful.  The real estate agent dropped the keys by Josh's work (he wasn't even there) and then we went and saw the house after work.  It was pretty crazy to be in. And by crazy I really mean scary, thoughts raced through my head 'you mean I own this? For better or worse?'  The past homeowner was great, he left us two glasses and a small bottle of champagne with a welcome home card.  After the whole she-bang we had to remind ourselves this was supposed to be a celebration.... 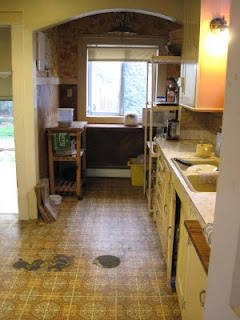 But of course, our first goal, was not celebrating, but to rip up a corner of the 4 layers of kitchen flooring.  We were excited to find out if we had hardwoods underneath? Over our glass of champagne we removed a section using a crow bar and hammer.  Underneath, we fir floors HURRAY! It was good, because we had flooring contractors coming in the next morning to give us quotes to refinish the floors. We knew this was step one, it would be dirty and the biggest project.  We debated for about 4.5 seconds doing it ourselves.  But, we had three weeks to move in, 1250 sqft of floor, and too many horror stories to think about this being a diy project.   Luckily, we found a great company to take over and they were willing to start on Monday. 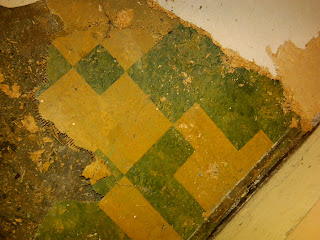 However, they were not willing to remove the 4 layers of flooring in the kitchen, turns out it could be asbestos and honestly, I don't think they wanted to do it.  So without really knowing it we had our first project and our tightest deadline to date.  We had until Monday AM to remove the flooring.  Equipped with crow bars, pliers, and knee boards we went to town.  Only to realize what a daunting task 250 sqft of flooring can be.  For two 10 hour days we removed flooring on our knees.  There was two layers of linoleum floors, particle board and the original handpainted flooring on burlap. Josh pulled out roughly 2000 staples by hand.  We listened to music, we did books on tape, we laughed, we got too tired to even talk. In the end, we finished and I remember those two days more than any of the others.
﻿﻿﻿﻿ 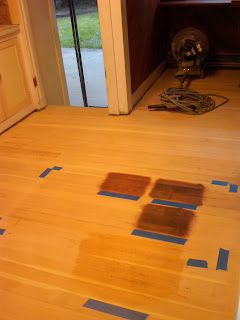 Posted by Taylor at 8:33 AM No comments:

March 2010
Josh and I spent a few weeks using every available internet hour to search for houses.  Houses were going in days and we were not going to be beat out.  We had now seen 11 houses and none seemed worth putting an offer in.  In desperation, we were tempted to put in an offer on a move-in ready bungalow.  But it was close to the interstate (you could hear it with the windows open) and the few improvements we would have made would not change the fact that you were still 2 blocks from a 6 lane highway. 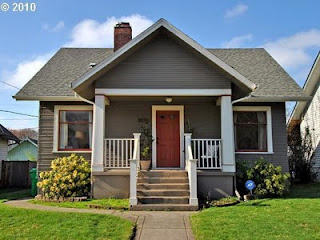 Then, our little house posted on a rainy Thursday in March.  We did a drive-by on Friday and told our real estate agent we wanted to take a look.  The roof was shot, the plants were over grown.  But gosh darn it, it had the cutest hobbit door. The neighborhood was not in our first round of options, mostly because it was older, respected, kid-friendly, expensive... so pretty much everything Josh and I were currently not. Overlook will win you over in seconds, with it's pretty yards, kids on bikes, and people who actually say Hi to you.  We knew that it would be a 'great investment' even if we were a couple more blocks from the 'hip' part of town.  Our agent suggested we try to see the house early Saturday before the Open House.  That way we could decide if we liked it and then see if there were a lot of offers. 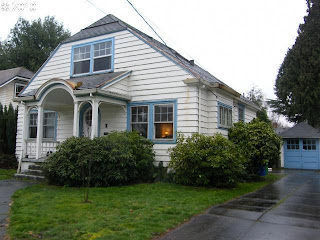 The owner took us through and that is actually the best way to see a house!  He had lived there for 40 years and he had some great stories and information.  The house was beat up, had a big 70's vibe and smelled a good deal like cat pee.  However, it was: priced well, not visibly falling down, did not have drugs in it, and appeared to have everything we wanted on our list (minus a bath tub).  That night we put in an offer and a day later we had bought a house....

Except, if you have ever bought a house you know that this is the best part.  It is literally all down hill from here.  Now you have home inspections, appraisals, bickering over repairs, general doubts, and other horrible misgivings.  But since this is now a year away, I will gloss over them and say we bought a house.  On May 5, 2010 we got the keys and the real story of our Castle began.
Posted by Taylor at 2:53 PM No comments: