So I went a little out of order with my posts because I wanted to get the kitchen saga out all at once.  In October, a month prior to the kitchen remodel we took advantage of some great weather and addressed our yard a little more.  We had made some unsuccessful attempts earlier, but I have not recorded them on the blog because I am supposed to look good on this thing.  So failures are being glossed over. 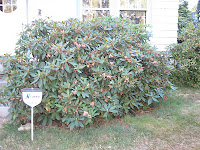 My biggest issue in the front yard was the five HUGE rhodies that were overtaking the house.  We could have cut them way back, suffer with a year or two of weird filling in, or we could remove them.  These are absolutely beautiful rhodies, they were just too big for where they were, I wanted them gone.  We put a 'you dig you get' notice on craigslist and had a few takers, however, no one could have envisioned how hard these were to remove.  We had an older couple work for three hours before giving up without one rhodie out.  It appeared we needed to rethink this.  So after we did some digging of our own, Josh decided that we need some more power, a lot more power.  He borrowed his companies truck and we chained the trunks to the back of the truck.  We were nervous, but decided slow and steady would be our approach. 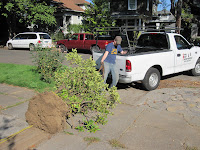 It was AWESOME, we ripped out four of the five rhodies in about 20 minutes, after three hours of digging.  We lost two rhodies, which were placed in our backyard to rot all winter. Until we broke them down into our yard debris bin.  The other two were craigslisted and went in a week.  Our real problem was landscaping in the front, or I guess you could say the lack there of.  It was October and we had to get moving! We went out to Garden World, a huge nursery 30 minutes outside of Portland, and took advantage of the late season to stock up on some goods.  We bought hydrangeas, mums, a Virginia Sweetspire, a crape mrytle and some other smaller ferns.

We also bought several stepping stones from lowes to create a pathway from the driveway to the front walk. 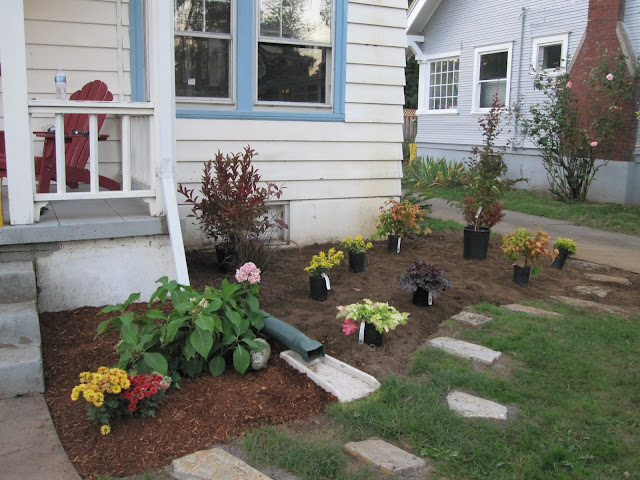 Posted by Taylor at 2:42 PM No comments:

Now that we had replaced our counters, sink and faucet we had to deal with the missing backsplash.  At first, we thought about putting in subway tile.  We price out the tile and realized this was a bigger investment then we had first thought.  The other issue was the time involved.  Neither Josh nor I have ever tiled before, we knew we were capable, but a little nervous of our finish craft.  Then we thought about the weekends of work to install the tile, grout it, and seal it.  We also realized this would all have to happen while we were using the kitchen, not ideal.   There was also the lingering thought in the back of our heads that one day we really wanted to gut the kitchen and create a more functional space.  Our new goal was to put in a backsplash in the fastest cheapest way without it looking like an afterthought. 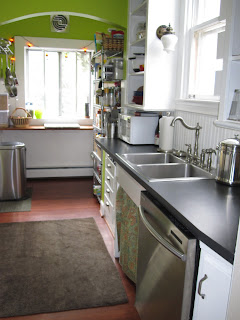 We decided we would beadboard the backsplash.  We felt that the beadboard matched the overall style of the house and it was about half the cost.  We went to Lowes and got some 3' x 4" pine beadboard wainscotting.  We laid out all the pieces and primed them at night during the work week, then Josh spent two days installing them, cutting around our various switches and cabinets.  He also installed some trim underneath the countertop to dress up the transition.  It was a whole weekend of work, but it made such a difference. I followed behind with my trusty caulk gun and white acrinamel semi-gloss.  All in all, we felt pretty good about our solution.  It was fairly easy and kept with the style of the house.  We worry a little about the durability of having wood right near our sink but it seems to be fine. Our little kitchen was wrapping up. 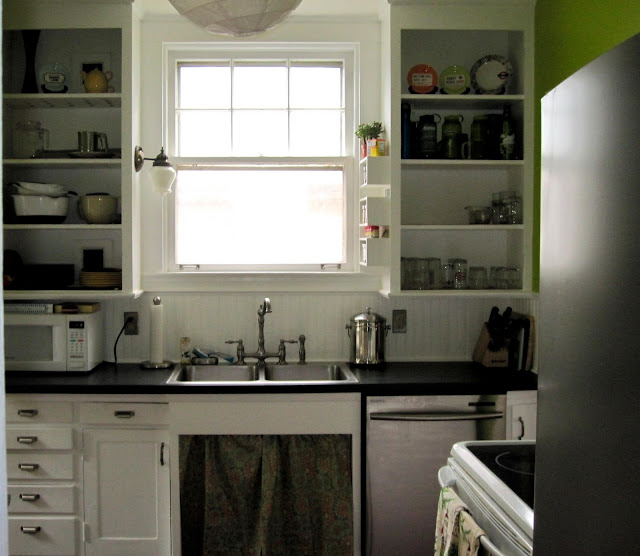