Wrapping up the front porch project just got me more excited to start moving on our back porch.  For a bit of a background when we bought the house there was a covered back porch off the mudroom.  It looked like this. 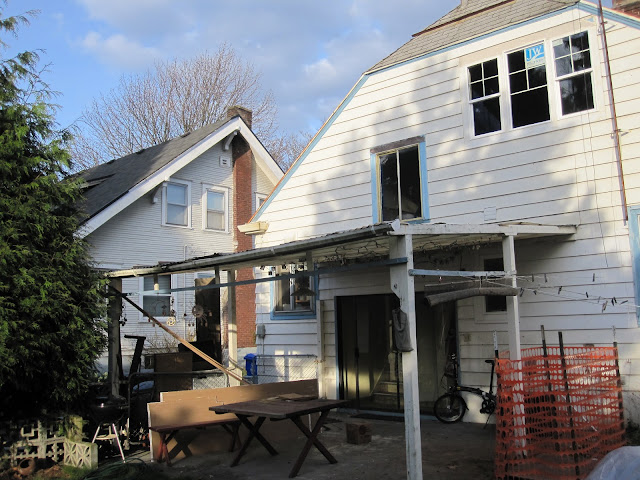 The entire thing was structurally unsound and I cringed every time the wind blew.  That being said, we used it all the time.  It was a great place to eat in the summer and to have friends over and sit out back. Our house can start to feel pretty small when you have 6 or more people in it. So the back porch became a great additional hang out space. 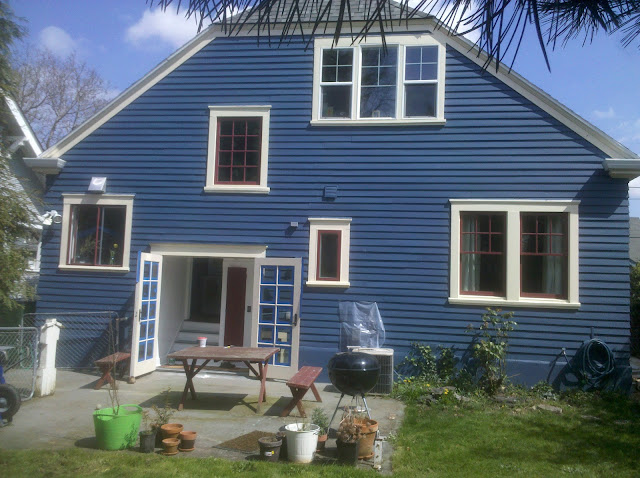 When we remodeled the outside of the house there was no option, it had to go.  It came down in one short afternoon and it was a huge difference.  The backyard looked so big and open.  Unfortunately, we missed it immediately.  The back of our house faces West and during the summer it was super hot out there.  You could literally cook yourself on that patio waiting for the BBQ. We knew we wanted to put something back but decided to wait it out and take on the project in 2012.

As part of the Depave project we decided to remove some additional concrete from around our patio.  The patio was pretty large and connected to our driveway which made it feel like we were eating out on our driveway.  We had no green space.  Josh and I envisioned a similar but smaller back porch, that we wanted to screen in.  We decided to surround the porch with raised beds to act as enclosure and to give us some prime planting areas in the back of the house.  There were napkin sketches at beer gardens and several conversations before we came up with this configuration. 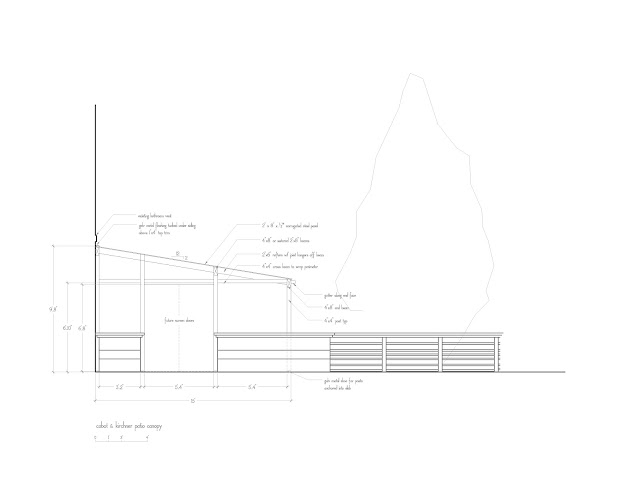 Since this would call for some big lumber and the summer already seemed to be rushing past us, Josh and I decided to outsource the actual canopy portion.  We were willing to build the raised beds and screen the porch in, but we would leave the heavy lifting to a crew of guys.  We called back our contractor who did the exterior work on the outside the year before.  Three days later we had a new back porch!  Can you believe it?  I came home and it felt SO right to have that space back there. 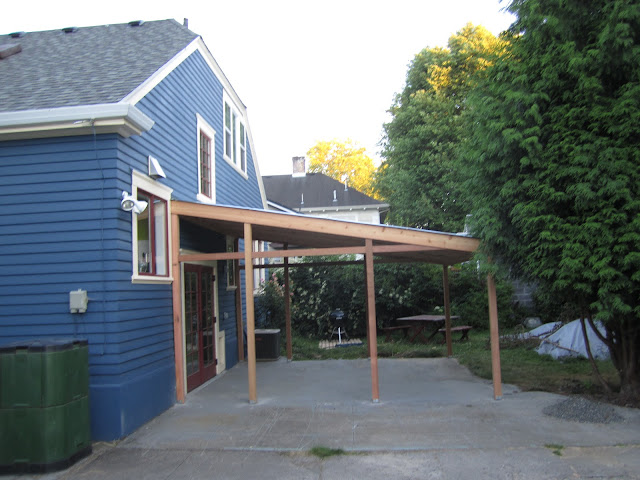 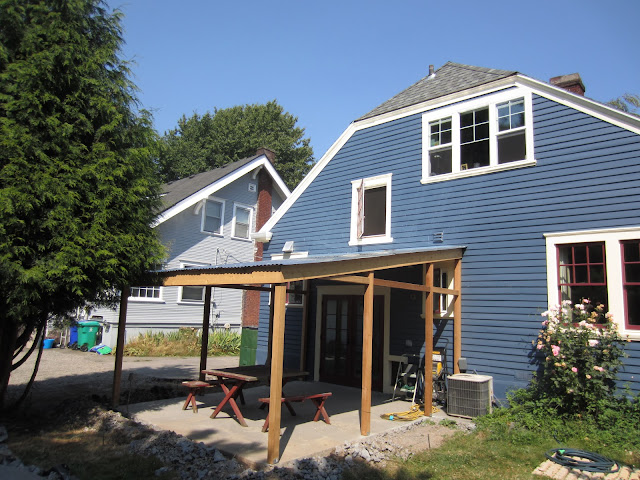 We chose to use cedar for the columns and beams, we saved some money and used standard structural grade pine for the rafters. We used economical corrugated galvanized sheets for the roofing.  To this point we have been pretty true to the character of our house.  We have been using a combination of restoration and thoughtful replacement to try to keep the old gal moving.  We did not do this with the porch, we felt this was a 'new' space that was part of the yard.  We were willing to go a little more modern and industrial. Also I love the sound of the rain on the metal roof. 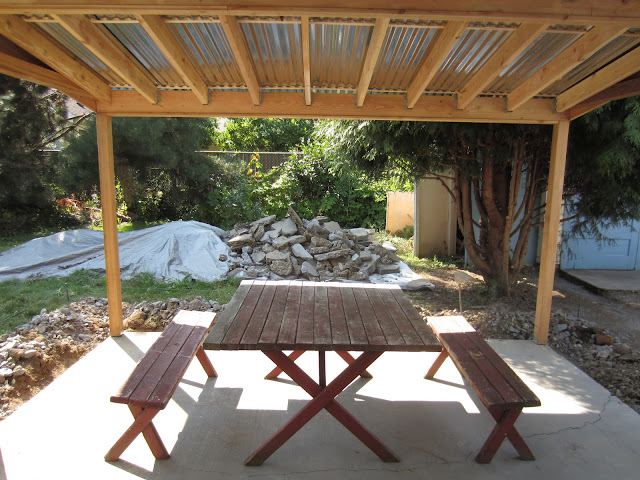 Posted by Taylor at 3:17 PM No comments:

This is one of those projects that is in the words of 'Young House Love' is a 'geez get on that already.'  With the horribly wet June I had to keep delaying painting our front porch floor and stoop.  It was horrible, the paint on the porch was chipped and wearing off.  The stoop was actually so black with moss and years of grime that the powerwasher did nothing.  I had scrubbed the porch and the stoop at least 4 times since we lived there.  Each time I got on my hands and knees with a wire brush and scrubbed.  Each time I ended drenched and the porch looked by all accounts exactly the same. 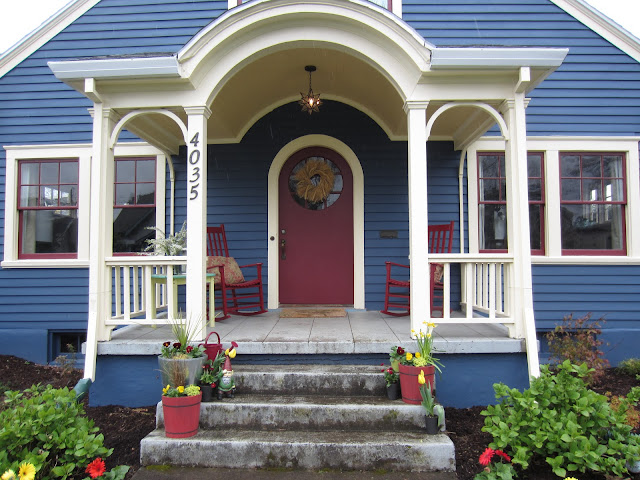 Painting a concrete porch is a process.  You first need to powerwash it to remove the grime and dirt that would cause the paint to not adhere.  You then have to wait up to 48 hours to allow the concrete to fully dry to guarantee the paint will stick.  Well waiting for a four day window to power wash and not rain in Oregon pretty much means you have to wait until late July. 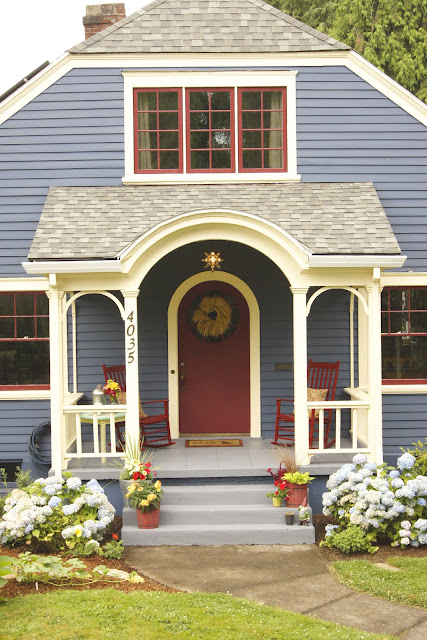 I finally got my chance in early July, I took a day off work and powerwashed the porch early Friday morning.  I decided 28 hours was probably good enough and painted the first coat.  I then waited 12 hours for the first coat to cure and painted the second coat.  It looked amazing!  I honestly, could have killed myself for not doing this back when we updated the exterior the summer before. 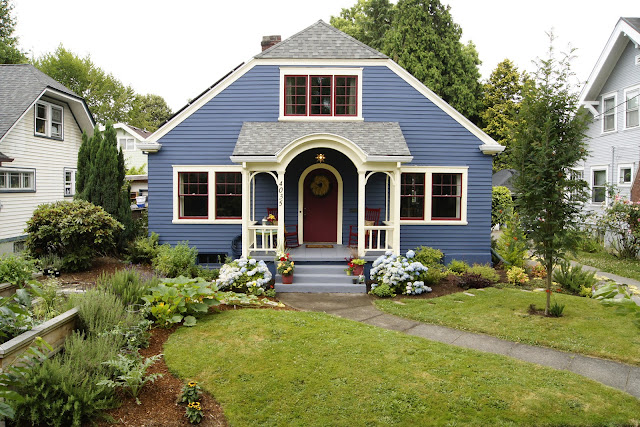 We chose to work with the standard gray porch paint that was available at Miller. Why mess with a good thing and this is also in our mudroom. We chose a matte finish because we worried about the surface being slippery.  Our concrete is a pretty rough texture so I didn't think we needed to add any sand to the paint, but I worried if it was glossy it would become more of a problem.

As a disclaimer to this, since I am writing in December, we did not have slips, however, I do wish we had done gloss.  The matte paint is not very cleanable and already I am having difficulty getting mud and stains off the floor.  I have a feeling this will be my learning experience and I will be painting it again this upcoming summer with something more washable.  You live... you learn, and your porch looks amazing. 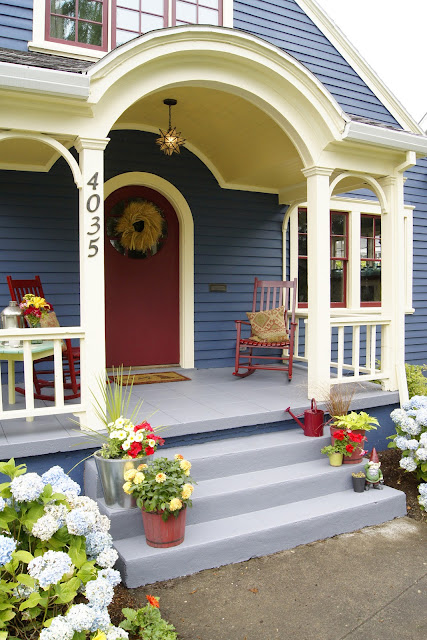