Since Josh was on board to keep working on the bathroom I started by calling in a steam cleaner to try and clean our dirty grout.  I figured that was the best way to start.  They come out and were super friendly, they explained that our grout was bad and had probably not been sealed or at least so poorly maintained that there wasn't much they could do.  I told them to give it a shot since they came.  They did.  The two guys worked for about 1.5 hour.  Honestly, not a huge difference was made.  They did seal the grout in the hope it would not get any worse. I think our solution is going to have to be a regrout- or maybe, if we stay in the house long term, to replace the tile.  But for now I will have to be satisfied with my not so nice grout. The one thing I could change was the silicone along the floor line.  The old material was covered in mildew and it did not clean up with any cleaning agent I had found. 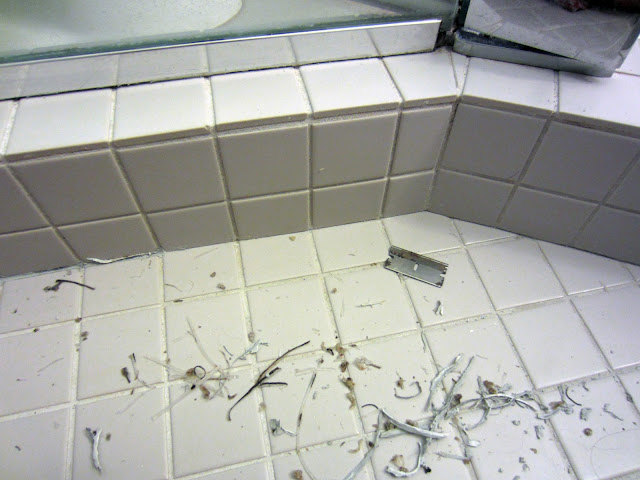 This was all me. It took about two hours to cut and razor blade all the old silicone out.  I did this sitting on a foam pad inside my shower.  Not a fun way to spend a Saturday. Afterward I cleaned the area with bleach and water and put a dehumidifier in the room to clear out any moisture.  The old silicone was a nice gray color which blended with the tile.  Home Depot and Lowes had three options: white, clear and almond.  I figured white was the best way to go.  I really wished I had done more research here and either ordered gray silicone or maybe used water resistant caulk that was gray. The white silicone is very bright.

While I siliconed (yes I am making that verb) we decided to start painting the walls.  Going off our last bedroom repaint oops I went with my gut and only bought one sample of paint.  Benjamin Moore Stonington Gray.  It is beautiful and the sample went up and matched the upper tiles in the bathroom perfectly.  Without a second of waiting I went to Miller Paint and color matched a gallon in semi-gloss. I then set about frog taping all the edges.  This was serious! I have never taped/cut in so much in my life. We had one door, one window, a tile shower, a sink cabinet, baseboards, lighting fixtures and a toilet.  Thank God we decided to paint the ceiling the same color or else I may have gone a little batty. 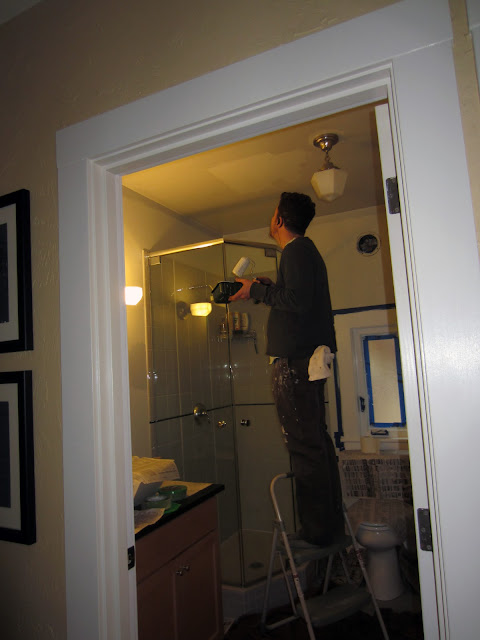 The ceilings in the bathroom are too tall for me to reach even on my step stool so I called in Josh to paint out ceiling and cut in along the upper edge of the wall.  I followed behind cutting in and using the weenie roll to roll the 2.5 sqft of actual wall space in the room. We were able to two coat the entire room in one Sunday. Since I had patched and filled all the holes the weekend prior.  One weekend, one fresh clean space. 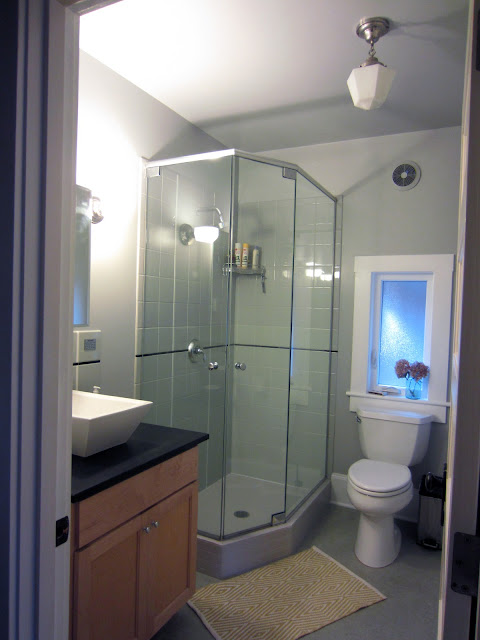 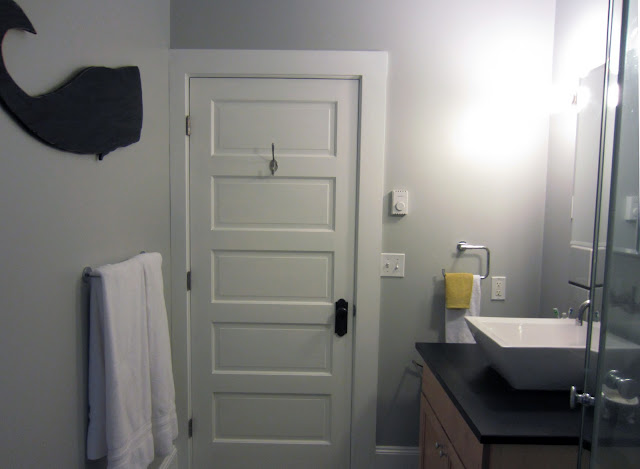 Posted by Taylor at 2:33 PM No comments:

Bathroom Trim: Painting Around the Toilet

A couple weeks after we finished the fireplace I started working on a list of things to do before September.  One of the rooms that needed the most work was our bathroom.  This was remodeled in 2006 by the previous owner and since moving in we hadn't done much to it. To start, it looks like a lovely bathroom, while not my style I appreciate that they made some good updates.   However, living with it for close to three years had really changed my opinion.  It was not my taste and many of the materials chosen have not held up very well to the daily abuse a single bathroom gets.

Back in 2010, we changed out the double hung vinyl window to a vinyl casement with frosted glass.  The main need for the change was this window opened directly to our patio and if the window was open, it was not discreet (this is a polite way to put it).  The new window opens towards the side yard and allows people to be on the patio and not looking directly in.  Also, the frosted glass allows us to avoid having to hang a curtain in a damp location. When we installed this window we did not patch or paint any of the wood trim that was mangled putting this in. I have carefully tried to cover this up with flowers or other bathroom accessories but it was pretty embarrassing. 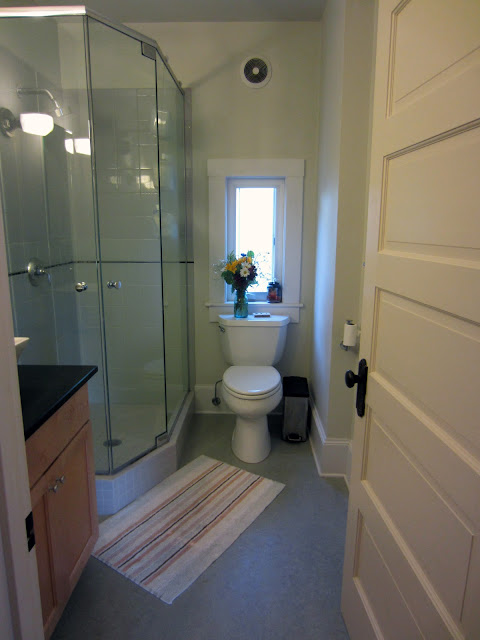 Using a house guest due in two weeks to spur me on, I decided to patch and repair the window trim and then paint all the trim a fresh coat of semi-gloss white.   Over the course of several nights I came home and patched and sanded.  I figured this was the best time since Josh was away on a business trip so the bathroom got a lot less use then it would.  This had been the hold up for years.  Between two showers, numerous bathroom trips there never seemed to be a time for get in there and allow paint to dry. 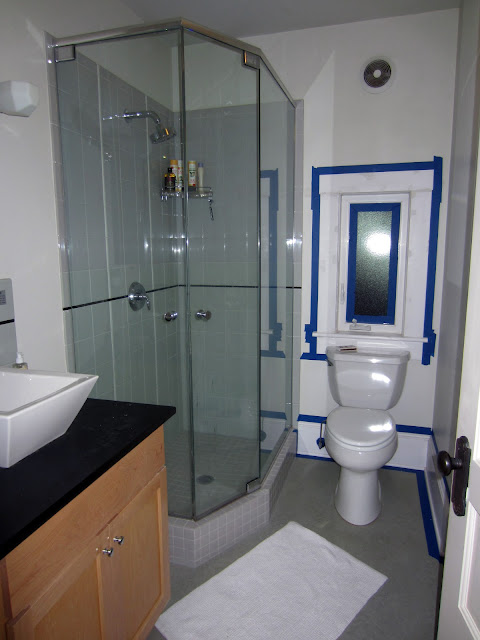 It ended up taking three coats of paint, which I applied mostly on my hands and knees.  I got up close and personal with our toilet and got to remind myself why this was the most poorly designed bathrooms I know.  There is literally about 18 inches of space around each item in the room which creates these wonderful thin slivers of useless space where hair can hide in nice balls and where I now needed to wedge myself to paint. There was a moment when I had to rest my cheek on the side of the toliet as I reached to get the back corner.  It was graphic (no picture, thank goodness).  The good news the bathroom is about 32 sqft so it didn't take long to do a coat, the bad news I got paint all over myself.

Josh came home to freshly painted trim and a cleaned up window and was dutifully impressed.  I was proud. 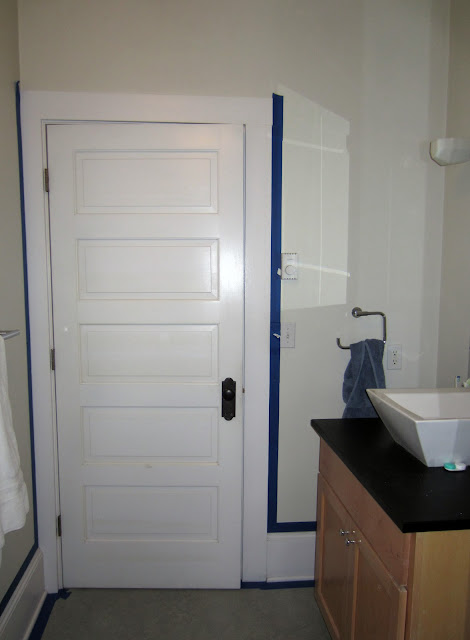 But, the rest of the room now looked all the more worn for the new glossy trim.  We both agreed we really needed to paint the walls and clean up the grout as soon as possible.  I made an appointment for a tile cleaner and figured we would start there.

Posted by Taylor at 2:54 PM No comments:

Not Your Grandma's Fireplace

After I made the big jump to paint the brick it was a smooth sailing to completion.  The fireplace surround that started this entire project was finally ready to be installed. For those who are interested, the surround is made by Pleasant Hearth and my mom purchased it on Amazon where it shipped free.  It has a craftsman feel to it and the arch top doors reminded me of our own hobbit door not so far away. There are several other designs that seem to work well for older style homes. 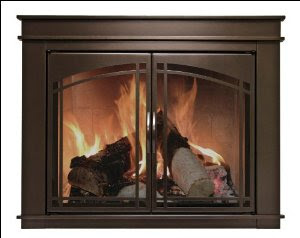 The install of the piece was really easy.  It pretty much has six toggle bolts that you tighten into the sides and top of your fireplace opening.  No seriously, that was it. According to the directions it might have been more complicated if our opening was taller, or if we lacked a metal brick ledge.  But for once, in the history of the house, we appeared to have something 'typical.' Once, it came out of the box it took only a few moments to unpack, install the provided insulation into the back and read the instructions. Just because I like to make double sure of things I decided to go online and read up a bit.  Most reviewers were positive, a few mentioned it you were using this to act as a damper you probably needed to add some additional sealing and insulation.   I went ahead and purchased the other items they recommended. 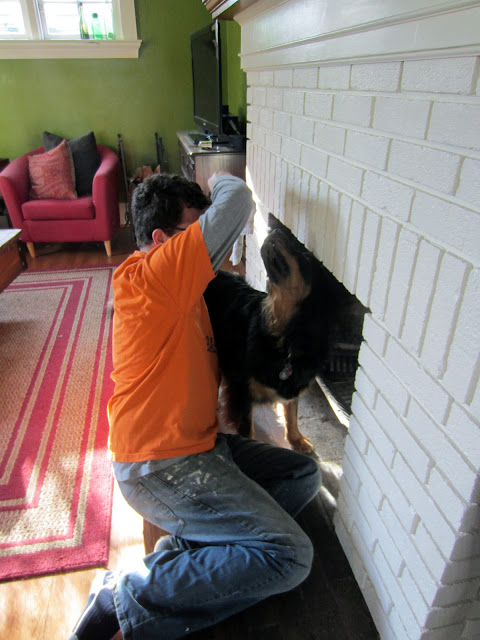 Josh cleaned the interior of the brick opening (Gus of course had to help).  He then applied a sticky back insulation roll, roughly about 2" thick around three sides of the opening.  This is supposed to help with the inevitable air gap where the surround meets the brick.  Sorry for the lack of pictures but since it was a two man job we were lacking apposable thumbs.  The next step after the surround installed was to use heat resistant silicone to fill in all the gaps around the top and edges where our surround sat flush to the brick but left openings where the indented mortar lines were.

This was honestly the worst part, I hate silicone.  Its not easy to work with, it sticks to everything, and it doesn't wipe off you or other objects with water.  Once every mortar hole was filled with silicone we installed the door handles.  Finally, I got my decorating cap back on and put back all my fireplace chitz. 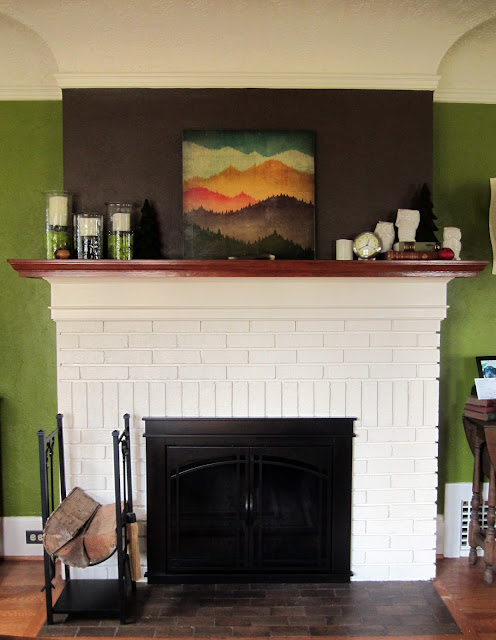 The run down is this.  Three weeks of work, one new surround, one gallon of masonry primer, reused stain, paint, and poly.  It cost roughly $300 and made a huge difference to our little family room. 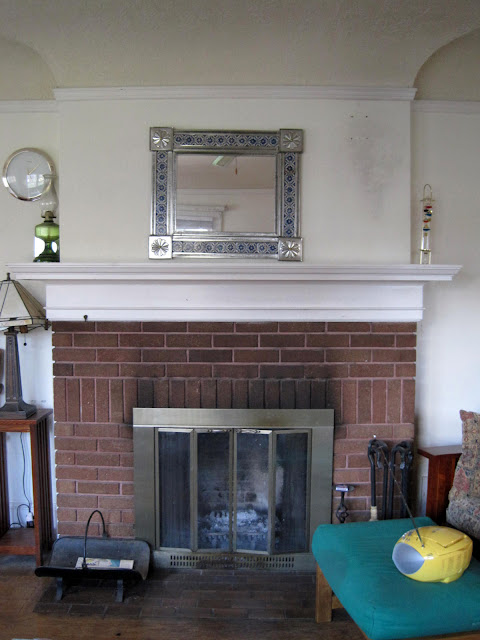 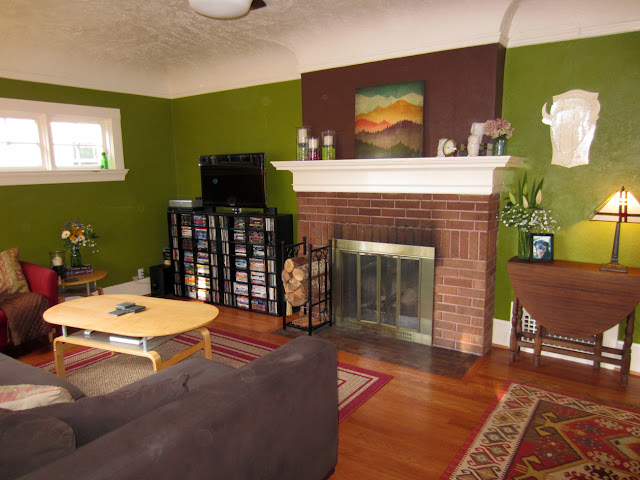 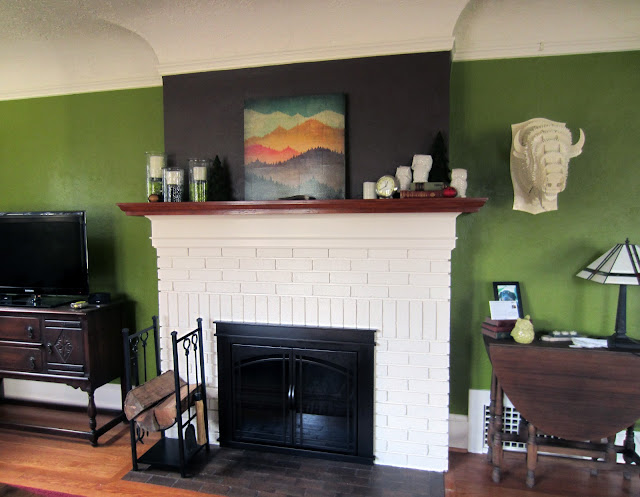 Posted by Taylor at 2:07 PM No comments: