After we completed the firewood pad we started addressing the 'pit.'  As a reminder it looked like this. 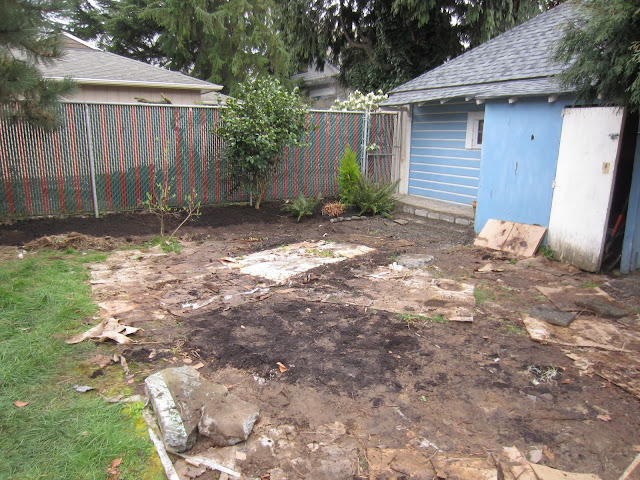 The first step was to remove all the cardboard.  This was gross.  It was soaked, covered in insects and generally ripped into small chunks when you tried to pull it up.  The real goal of sheet mulching with cardboard is that you just let it decay into the soil.  However, given the fact that we needed to level the area, and that we were not together enough to remove all the packing tape from the boxes (which would never decay)  we had to pull it all up.  Fail.

Underneath this lovely gross cardboard was hard packed clay mixed with old dead grass roots.  There was no way to level it without breaking it up.  This was a back breaking 3-4 days of turning over the dirt shovel by shovel.  I wished for a draft horse and plow but alas nothing came.  We may have been able to rent a commercial tiller, but I still not sure it could have gotten through the wet clay either. It was exhausting work and for that reason I have no pictures of this process. 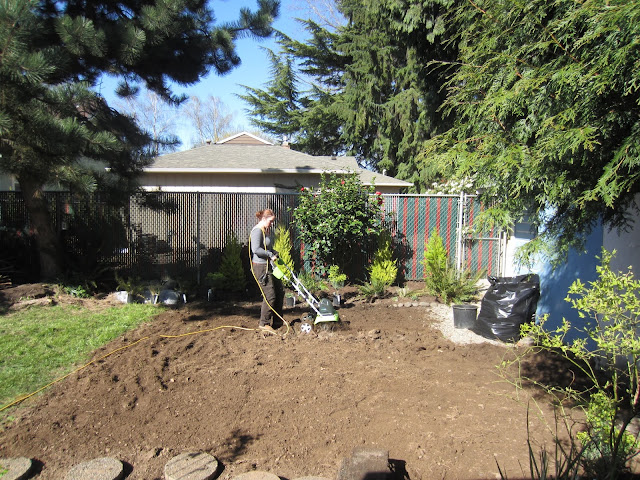 Then something amazing happened, it stopped raining and got hot, really hot.  In the most un-Portland March we got a 70-80 degree Easter weekend. We came out with the sun, using our little tiller (thanks Mom) to break up the large clay clumps and begin  to level the entire area.  The tiller is amazing for this work, I turned up our earth until it looked like the Garden of Eden.  Josh followed behind with a rake pushing dirt to the low spots and raking down any hills. We even got to take some of the dirt from the pile over along the side fence that the past owner had decided to randomly amass. 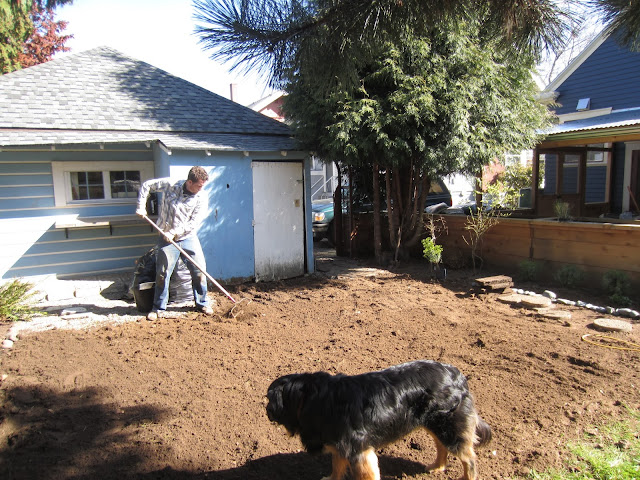 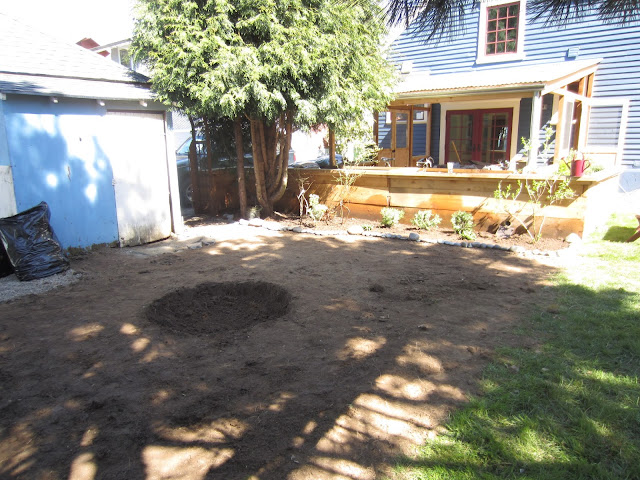 By Saturday we had leveled the space, compacted it, and dug out the round circle for our firepit.  We were done early so we decided we could go to a local Ciderfest and enjoy the sun.  Glorious! 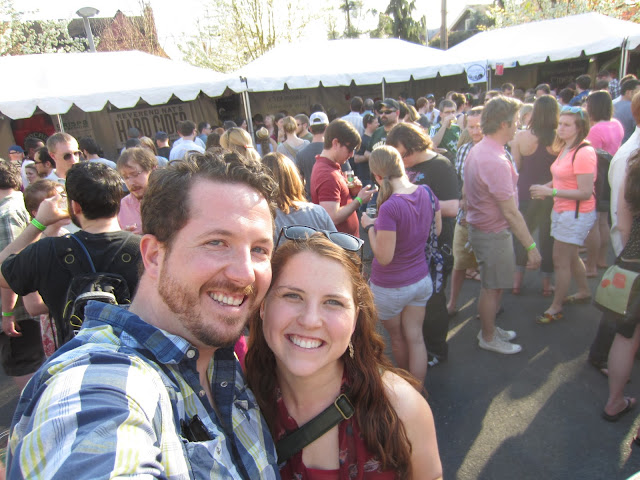 On Sunday, we went to buy boulders for the fire pit, only to remember it was Easter (we are heathens) and that the rock place was closed (not heathens).  We were devastated to be so close to the end and yet so far. We decided to try corporate America, knowing that it had long since given up religion for consumerism.  Bingo, Lowes trip.  There was, of course, no real boulders at Lowes, but they did have some attractive gray concrete blocks that were designed to be installed in a ring.  We were torn, we want the pit to be a bit more organic and less masonry- but we were here and it was pre-made to go together flawlessly (something boulders would not do). 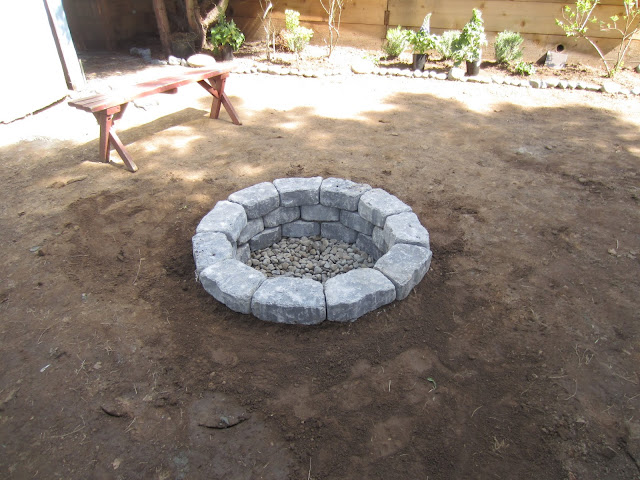 A full car of 28 blocks, 4 bags of river rock, landscape fabric, pins, some plants, and mortar and we were off.  We got home and I swear made the fire pit in about 30 minutes.  It was the quickest house project ever.  Josh mixed the mortar and shoveled it in and I laid the stones.  When we were done we filled the bottom with river rocks and back filled the dirt around the edges. 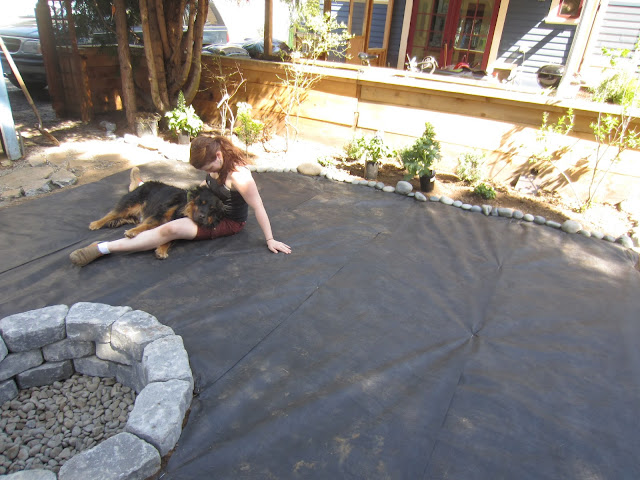 A few quick passes with landscape fabric which we pinned down. A cuddle session with Gus and we were ready to put the gravel down.  Josh powered through on Sunday afternoon and moved about 30 wheelbarrows of gravel while I spread it. Power to the man!  A little mulch and plants and suddenly our scary backyard looked a bit like one of those fancy HGTV shows. Kirchbot sun power for the win! 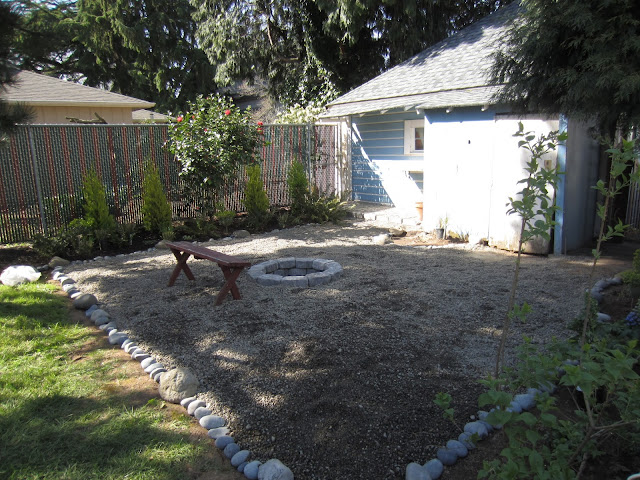 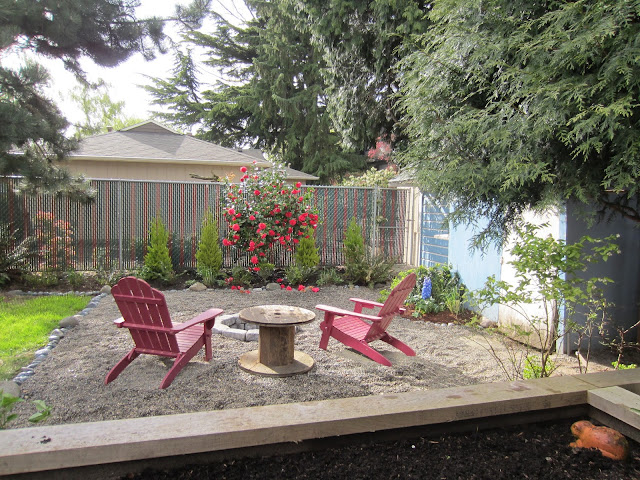