We took another month off in house land, our near death event of the almost falling chandelier made us decide to hold off.  We also were trying to save some much needed money for our exterior remodel which we wanted to take on in the spring.  So, I took the time to lust over some seed catalogs and make big plans to have a large organic garden come summer. 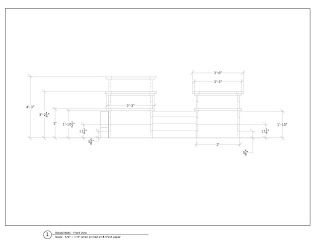 Since our backyard doesn't get much sunlight the most logical place to put our garden was in our front yard.  While this may seem to weird to people not from Portlandia, this is actually pretty common in our town.  In order to make it appear more pleasing we decided to building some raised beds.  This would help for multiple reasons.  First, we have a small hill on the corner of our yard that already needed a retaining wall.  Second, prior to moving in our sewer line was replaced and they had destroyed all the grass and plantings in this area.  Last, I am lazy and do not like to bend.

Josh went about creating some plans for the beds, when you're an underemployed architect it's amazing the time and energy your willing to commit to plans and elevations of small household projects.  But, it was good for us to brush off the dust on our autocad and make it happen.  After we both felt they looked good and provided enough space for our garden, we went ahead and ordered the wood from a friend.  These were beautiful pieces of cedar, since it was rough cut they were true dimensions and weighed about 100 lbs each.  He delivered them on a rainy day and filled our garage to the brim. 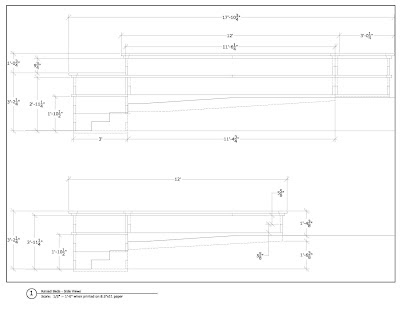 Now all we needed was a few days of no rain to get start....

Posted by Taylor at 8:56 PM No comments:

February  2011
O no, our first admitted house failure.  I came home from work on Monday and was watching TV on the couch.  While I was watching* I heard an omnious sound that seemed to be cracking coming from the dining room.  I turned off the TV and raced into the room.  There carefully looking at the ceiling I started noticing two hairline cracks that were not there before.  It could only mean one thing, our chandelier that had been up for nearly 24 hours was cracking the ceiling. 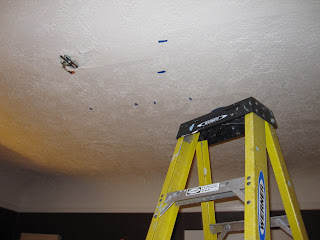 Your first immediate reaction is GET IT DOWN, but I was alone in my house and was kinda hopeless.  I removed everything off the table and started assembling the tools.  When Josh arrived home an hour later, the longest hour of my life.  I attempted to tell him as calmly as possible. Of course, in my head, I had a mental image of our dining room covered in lath and plaster dust everywhere, furniture ruined, tears.... you get the picture.  Josh agreed we needed to get it down that night so at 6:30pm we went to work.  We hurried and turn off the breaker, grabbed the ladder and started to unhook the chandelier.  Thirty minutes later our brand new, super beautiful, and excited about chandelier laid on the ground.  After that, we did some test drills to find our why it was cracking.  We soon realized it was exactly what we had feared.  The prior light's mounting bracket was not screwed into the structure it was only screwed into the lath. This was fine for the 2lb boob lamp but would in no way hold our 50lb chandelier.   We felt like idiots.  We assumed that in the center of a room there would be a joists and that the prior mounting bracket would be on it.  There is actually no joist in the center of our dining room.... now what? 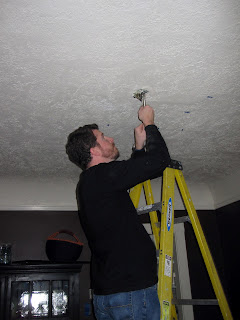 The next weekend, Josh engineered a solution guaranteed to hold up not only the chandelier but also a large silver-backed ape swinging on it.  We went upstairs in the attic and installed a 2'x4' between our two joists to act as a bridge.  We place all thread rods through the 2'x4' and through the ceiling in the dining room and mounted the bracket to it.  Just to be sure we marked all the old cracks in the ceiling and then installed the chandelier back.  Good news, it was quicker the second time, bad news it still weighed a ton. For the next week we watched the cracks to see if they grew.  They did not, and I did not hear anything else from the dining room.  We patched the cracks and painted and pretended like it had never happened.  Except I just told everyone on the internet, and everytime a contractor goes in our attic they say-- what's with the 2x4? 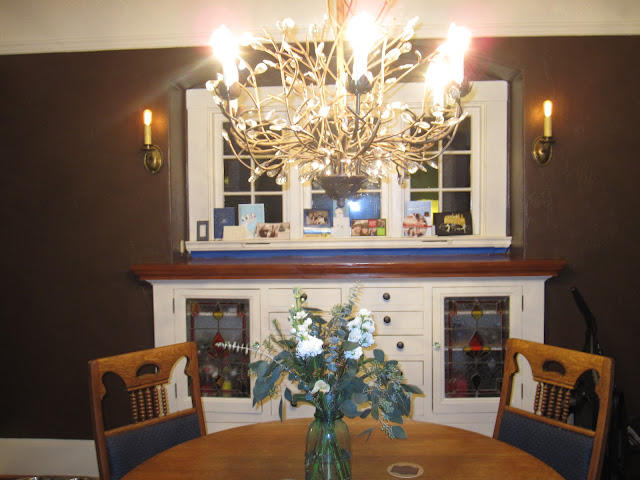 *side note for everyone, I tend to watch TV at an alarmly quiet level-- seriously like level 8, I am half deaf (no hearing in the left) and this makes it even weirder. But I swear I hear it better if it's lower.  This annoys Josh who needs it at level 25 which feels insane to me.

Let There Be Light... And Bling

After Christmas I started to become alarmed that we appeared to be starting a trend.  A trend of purchasing large items in big boxes and leaving them fully packed in our dining room.  Procrastination should probably be a new years resolution.  The first box was our dishwasher that spent three months in our dining room before we installed it.  Now, we had a very large box containing our dining room chandelier.  My parents gave it too us in early December as a Christmas present.  Late January marked over a month in our dining room and I decided it was time. 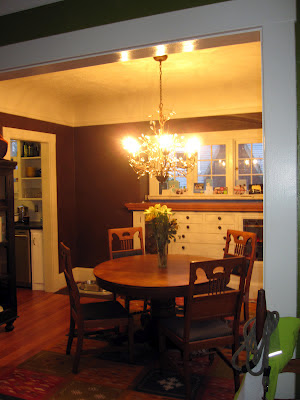 My parents purchased our whimsical chandelier from Pottery Barn.  The decision was tough, I looked at thousands before I gave into this one.  Most felt way too formal for our small little cottage, others felt to rustic. This one grew on me each time I look at it.  It was in no way historically accurate to our house, however, it provided the appropriate level of bling mixed with casual natural appeal. I unwrapped it and realized that all the crystals do not come assembled.  At first, I was a little frustrated I was looking at easily 200 crystals that had to be screwed on to every surface of the chandelier, but as I started going about it, I actually appreciated it.  We probably used half of what came with it, a girl can only take so much bling! 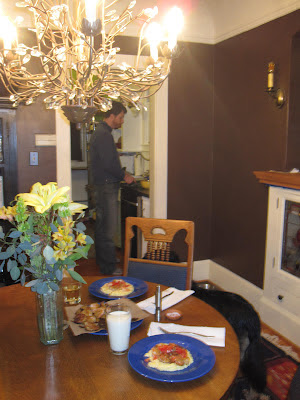 Josh and I moved out the table, shut off the breaker and went about installing our first big light fixture in the house.  We took down the 70's flush mount that I like to call 'boob light' (you know what I am talking about... round glass dome with a shiny pointy decorative metal knob in the center).  After this was done, we measured how long we needed the chain and proceeded to remove the extra links.  What I mean by this is that Josh attempted to pry the chain open to remove the extra links only to discover that this was impossible. Pottery Barn your directions state "remove extra links until desired length is achieved" I am not actually sure who they thought could do this, maybe the hulk.  We pulled and pryed with multiple tools until we gave up and actually cut the links with our sawzall, take that!

After that our next task was for one person to hold the extremely heavy chandelier while standing on a ladder, while the other person wired it together.  Mind you this was about 50lbs and there is no real place to hold it given its about 4' around and surrounded by pointy crystal covered branches. This was hard, way hard, our old wires are not secured to anything (no junction box) so they like to slip back into the ceiling if your not careful. Eventually, after about 30 minutes and some seriously sore arms we got it up.  Flip the breaker back on and.... LET THERE BE LIGHT.  This thing was seriously gorgeous when the light was on.  It throws great light around the whole room and the crystals almost turn into mini lights.  We were very proud and cooked a celebratory dinner to eat underneath.  Our dining room felt completely transformed.  Actually pretty painless considering it only look us about 2 hours.