Background: in 2010, when we moved in we replaced all the appliances in the house except the range. It was newer, from 2006, and it seemed unnecessary to replace something that was four years old. However, as soon as we started using it we knew we wanted to change it out to a gas range.  Josh and I both enjoy cooking. Actually, the better description is Josh likes to cook and I like to drink wine and occasionally bake pies.  ﻿﻿﻿﻿


Over time we began to hate our existing range and not just because it was electric.  True hate.  Reasons:
1. It took forever for things to heat up on it
2. It only had one heating element inside the stove (on the top) which meant you could never evenly bake anything
3. It had one of those smooth cook tops which had several dark burn marks from the day we got it and if you didn't clean it everyday you added more baked on stains
4. The handle on the door like to detach at the worst times (like when you had a large burning hot meat dish in your hand). We did eventually fix this by using epoxy to glue it back on, but still
5. It was the only white appliance in the whole house, sitting right next to our stainless fridge.
6. It was the pits


So why the wait?  The price tag. We got our dishwasher and fridge super cheap, as in the combined cost was less then most people spend on a standard fridge.  But ranges seem to never go on super sale, especially the stainless steel gas ones.  Also, all the fancy name stoves not only cost as much as a car, but had horrible reviews for quality and warranty issues.  After waiting and watching,  I got an issue of Consumer Reports that listed their top gas ranges.  I was excited to see a super affordable range made the top of the list.  It had the professional look we were going for and seemed to be the cost of some of the cheaper builder grade ranges. I did some research online and discovered that Cosco currently had the item on sale and would ship it for free.  It was too much to deny.

I called my parents and asked about an early Christmas present, as well as a Josh birthday present, as well as the next two holiday presents.  Seriously, I wanted this stove!  They agreed and gave us the go ahead (even better they were Cosco members, unlike us).  So, I ordered the stove and then heard back that day: it was coming the next week.  The week before Thanksgiving, when I was planning on cooking a huge meal. Holy cow.
I'll save you the long story but the way Cosco delivers items is 'curbside,' literally, on your curb from their truck  I was aware of this but when I saw the shipping weight: 500lbs I got worried.  Once the item was in the house I knew we could put it on our foam moving men pads and move it anywhere.  However we had 4 large concrete steps between our curb and our kitchen.  I made a plan, I would borrow a large dolly from work and take off the afternoon, then I would bribe the delivery guys to somehow get it into my house. Armed with my best smile and some twenty dollar bills I readied myself.  It kinda of worked.  The driver and his helper arrived, and were so nice.  The problem: he was in his 60's and his helper was shorter and thinner then I was.  Together the three of us manhandled 500lbs on to the dolly, rolled it to the stairs and then tried to pull it up the stairs.  We failed about half way up. 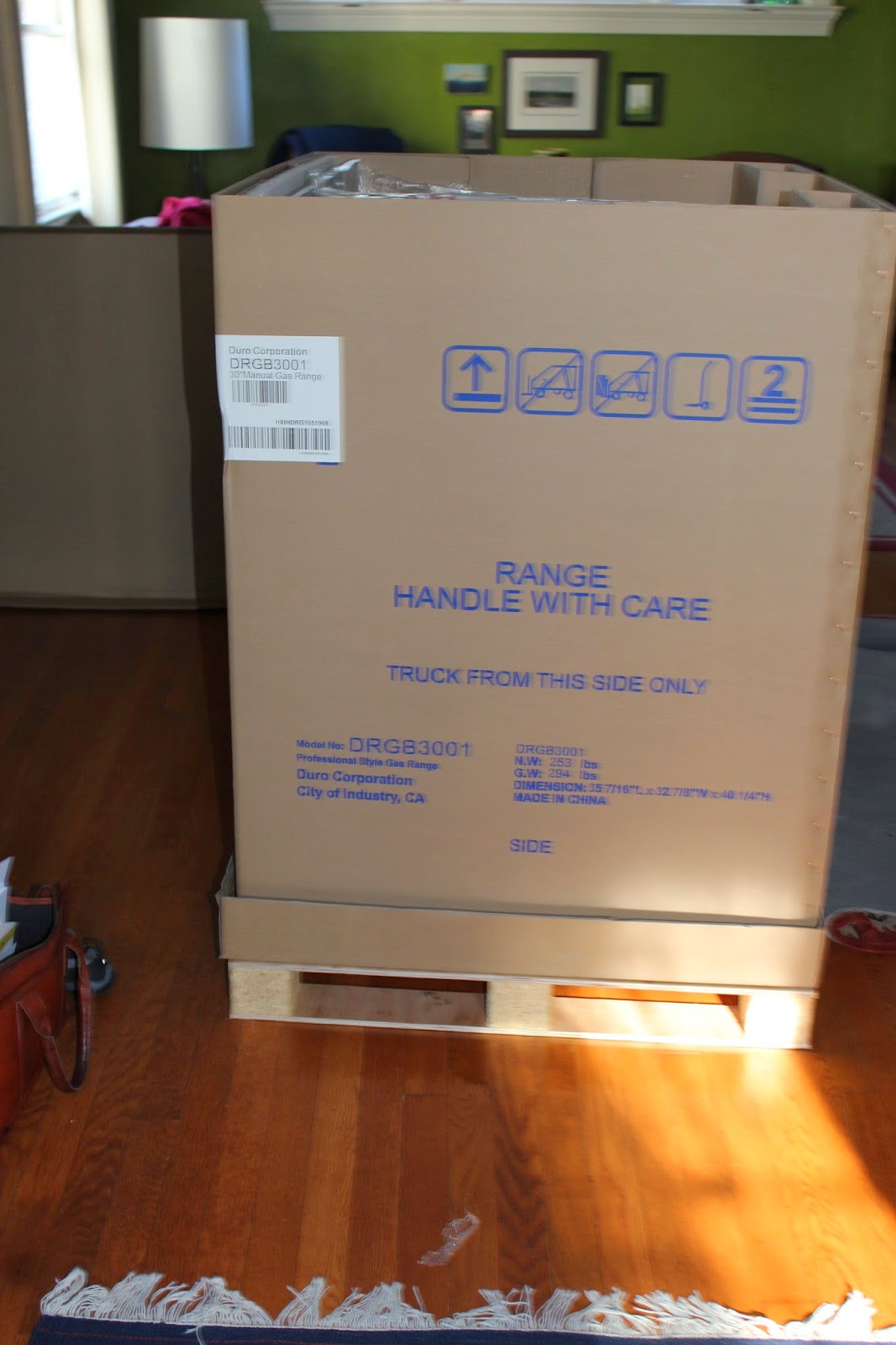 My neighbor, who happened to be washing his car across the way ran over and with his help we pulled it the last two steps. It was crazy scary!  I gave the driver and his helper a tip (which they tried to refuse?!?) and bought my neighbor some beer and then proceeded to dance around the huge paletted stove box in my living room!  I adore you gas range and you are shiny and I will love you forever! 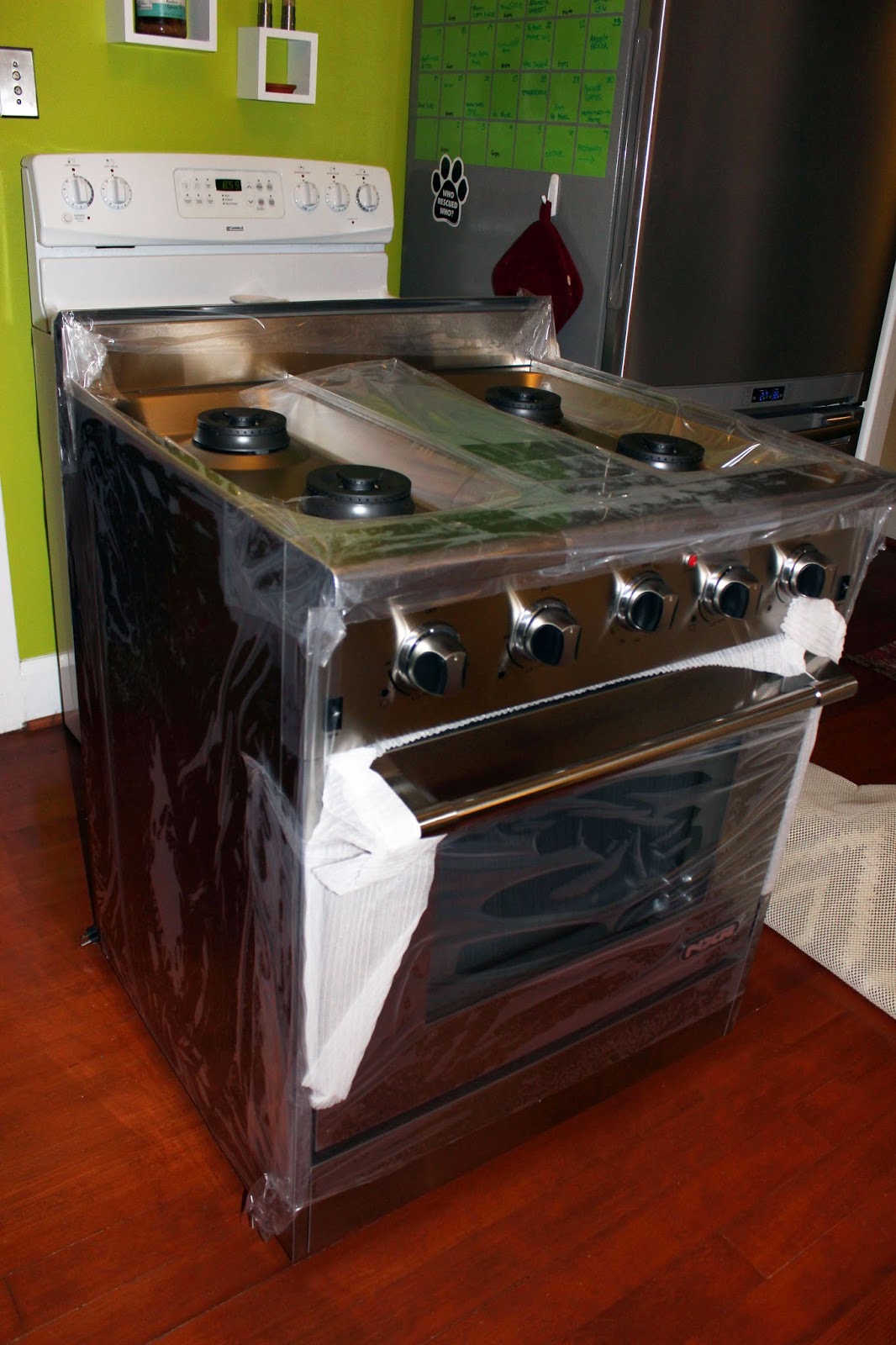 Posted by Taylor at 8:11 AM No comments:


After the wedding, Josh and I took a much needed month vacation from any house or life projects.  It was glorious!  Then it happened, I started to feel the itch and needed to find a quick and easy house project that wouldn't cost me anything.  Just so you can understand how much I need house projects I started this on November 9, 40 days after we returned from our honeymoon. 40 days and 40 nights without house project, the longest I had gone in over 4 years. Impressive. 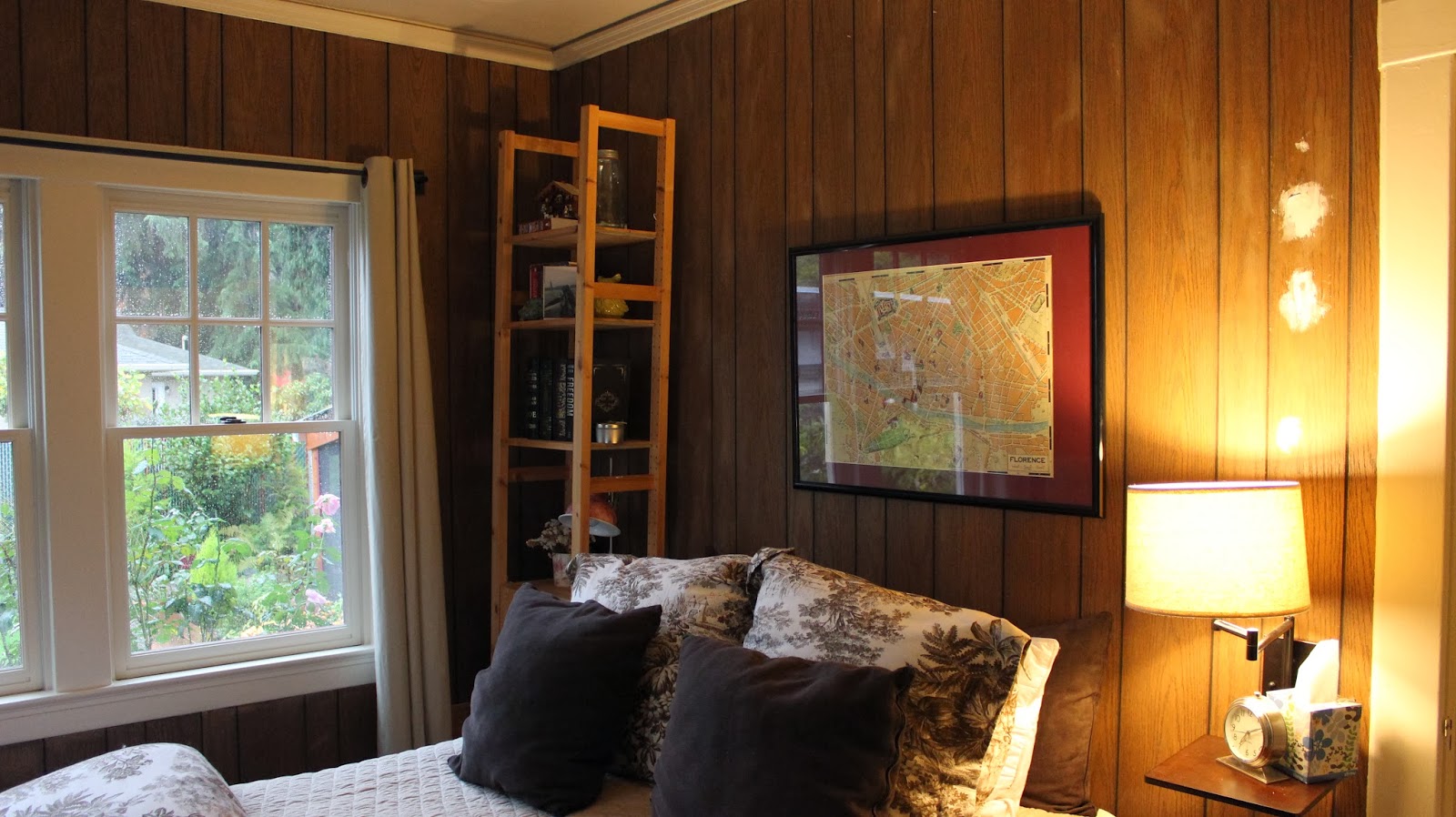 Ever since painting the windows in the guest room I had the urge to paint the dark wood panelling in the space.  Originally, I embraced it in all it's 1970's glory, but the fact was it was in pretty beat up shape.  There were several areas that needed patching and repair. So it started on a Saturday when I spent a few hours moving everything to one side of the room and patching and caulking a few holes, gouges, and cracks.  A quick sand and wipe down and I was ready to rumble. 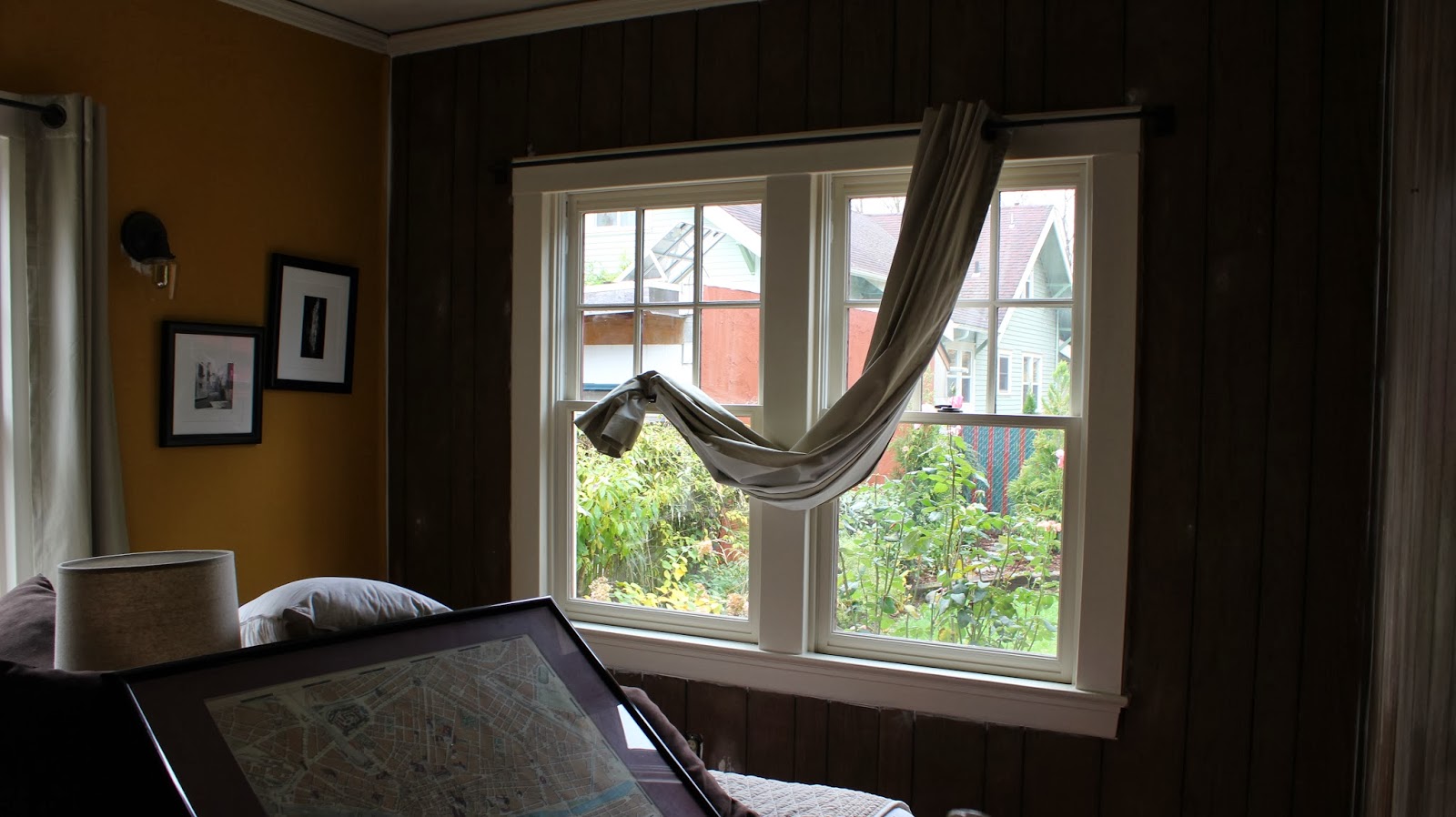 We only have panelling on two walls, so this was going to be a quick project. I decided to put the primer on Saturday night right after dinner so it had a good 10 hours to dry.  Very quickly I discovered our primer had gone off (apparently 3 years is all you get with Kilz). It was chunky and smelled horrible. After spending 30 minutes trying to salvage it by mixing and adding bleach I had to call it.  I managed to find another primer deep in the depths of our basement hoard.  By the time I restarted it was 8pm and suddenly my easy project had me painting late into the night in a grumpy mood. Sigh.


Sunday ,I woke up early so I could get two coats of paint on the panels.  The primer had essentially absorbed into the wall so I knew multiple coats may be in my future.  I decided to paint the entire wall with a brush.  I figured I could get more paint on, get into the crevices of the panelling and wood grain and hopefully give the panelling a more wood work look.  I used a three inch brush and moved through the room painting our bone white acrinamel.  It definitely was slow in comparison to a roller, but it wasn't horrible.  It took me about 90 minutes to finish the first coat.  Later, around dinner time, I went back and did a second coat.  Luckily, that seemed to be all the room needed. 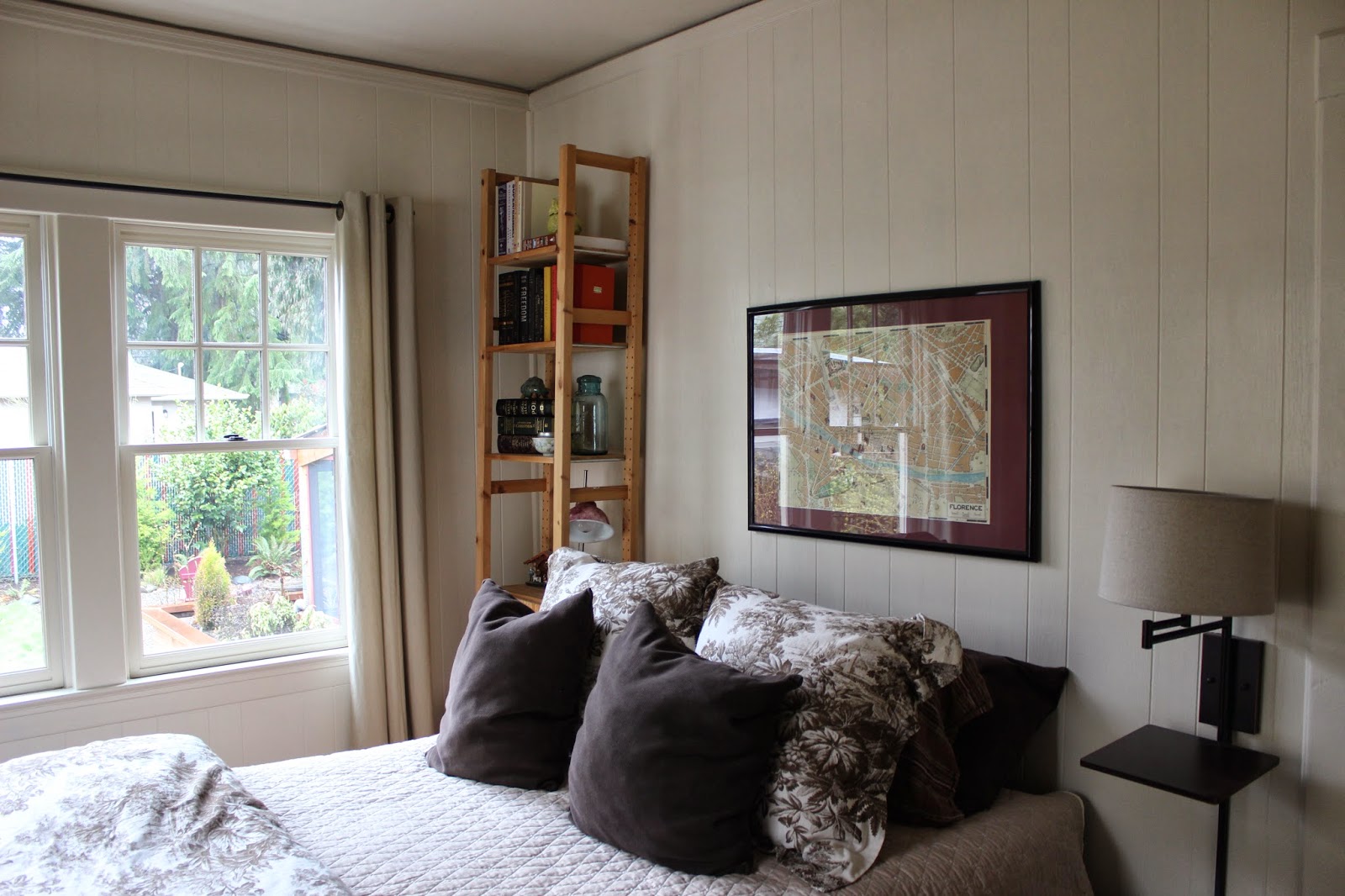 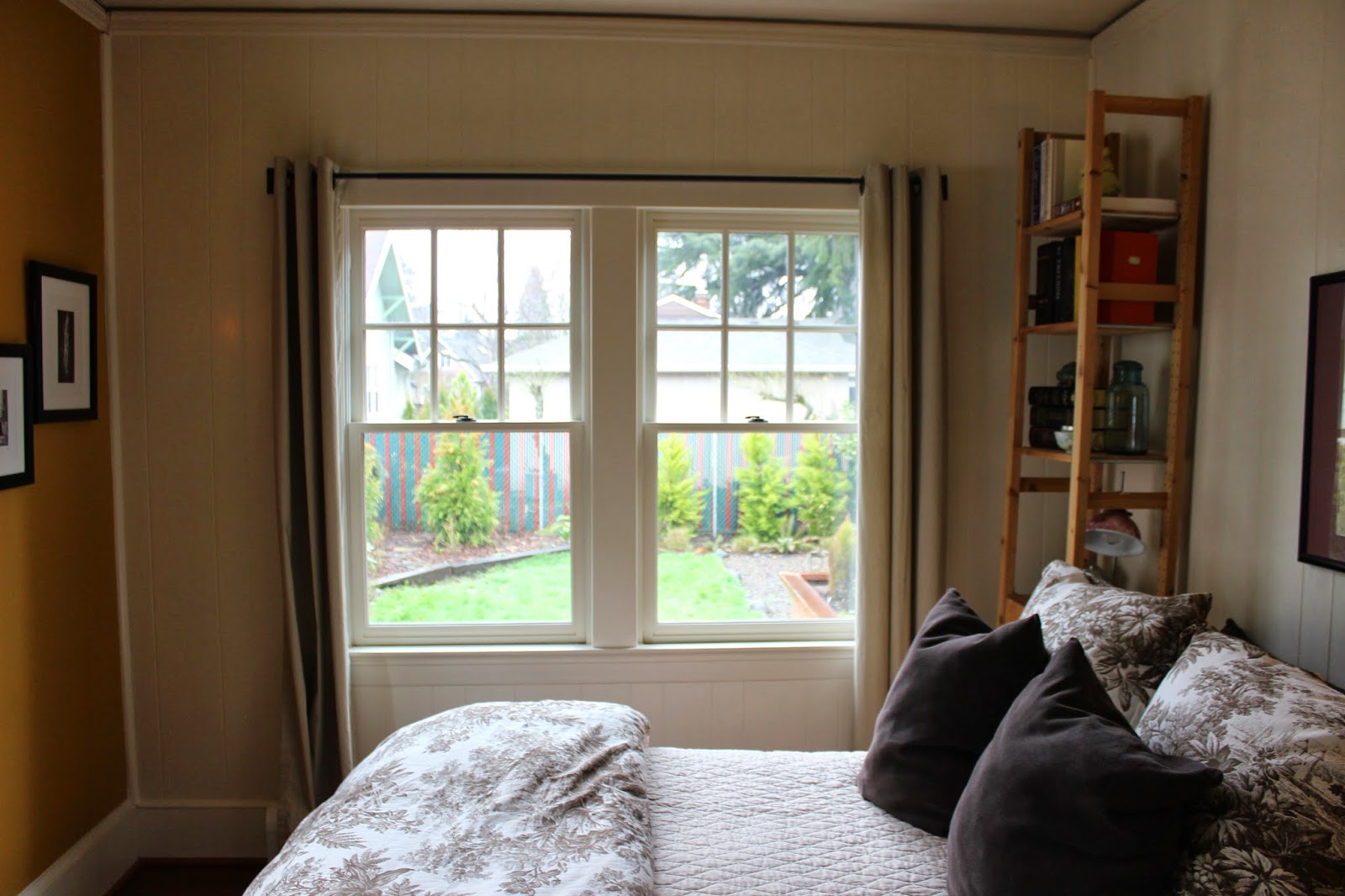 I cleaned the floors and dusted the furniture and then put everything back into place on Monday.  This is now the brightest room in our house.  It gets both South and West light so with the new white panelling it practically glowed afterward.  A small mini update and the room was ready for my parents to visit for Thanksgiving. 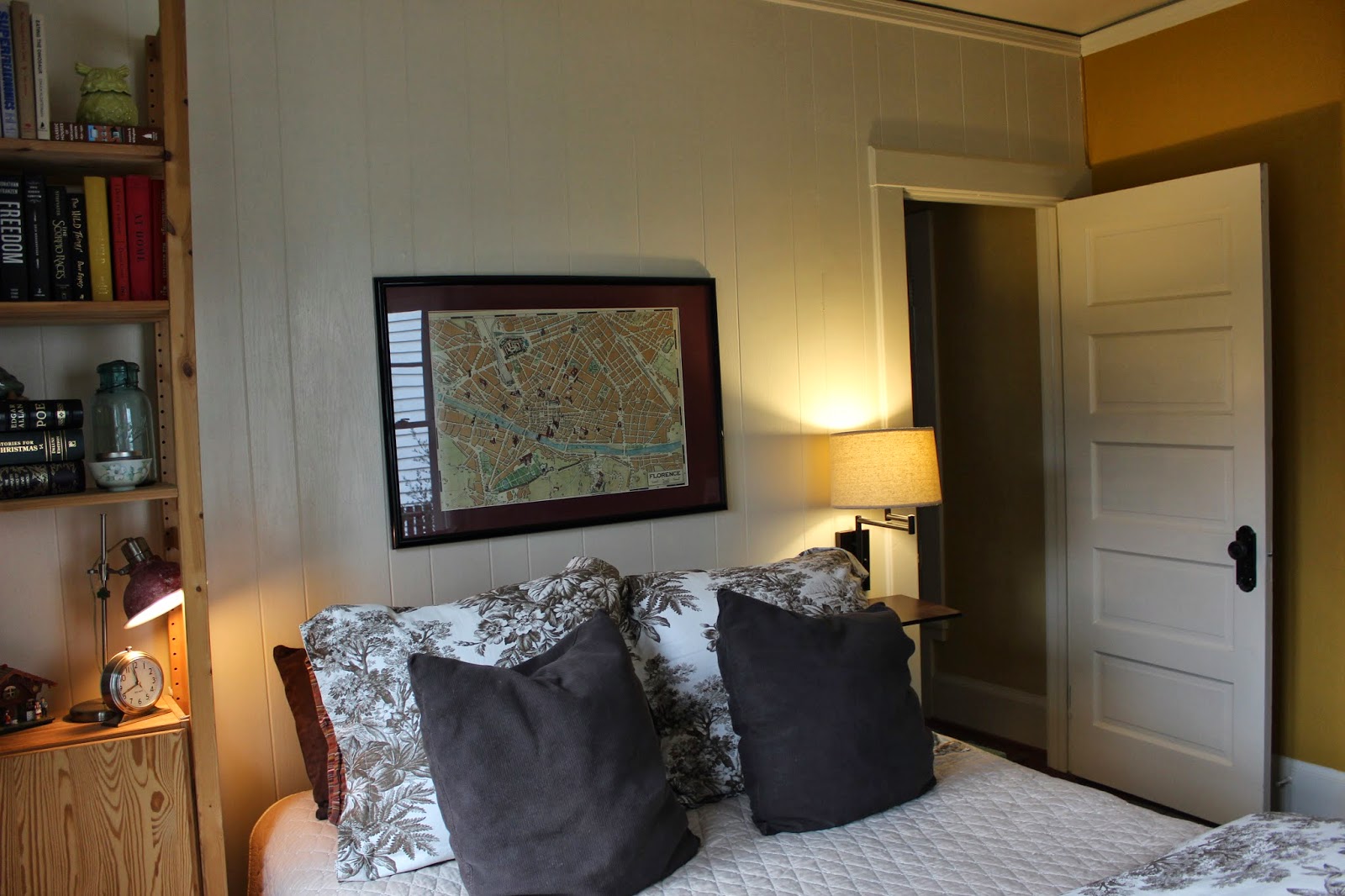 Posted by Taylor at 8:46 AM No comments:

September 2013
Not much of a surprise to those that know us.  On September 21, 2013 Josh and I got married in Hood River Oregon.  Much of the work on the house, spotty blog posting, and lack of photos stems from our work, exhaustion, and excitement for the big day. In many ways, planning our wedding was similar to working on the house.  Josh and I had by no means a diy wedding.  However, I would say that we tried to make our wedding very homemade.   We made sure that the details reflected us and our interests, values, and style. This meant that we worked as our own wedding planners, we selected all our own vendors, when possible we made made choices that were in season, organic or local. Together we created our theme and crafted many of the details of the day. 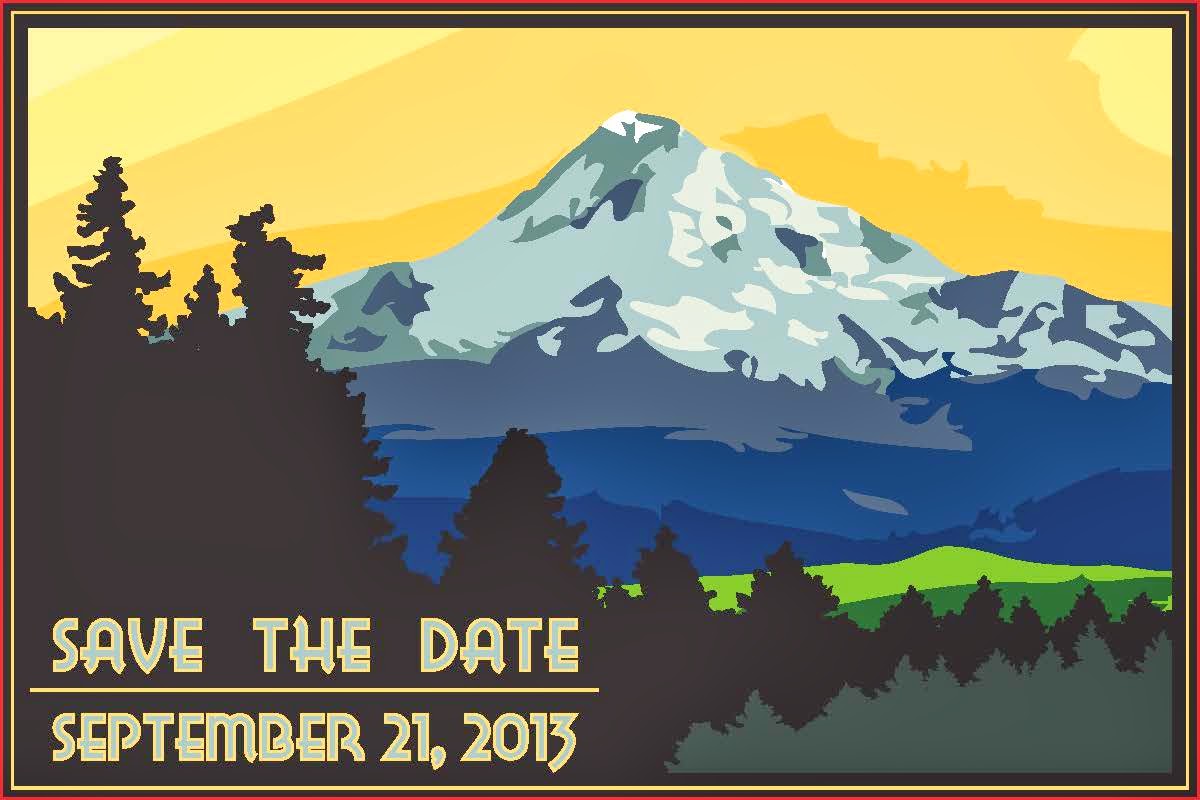 We decided to make our own Save the Dates.  We made our own wedding favors.   We outsourced our real wood engraved invites. We love stationary and felt this was the best way to give every guest a keepsake even if they didn't come to the wedding. Our homemade touch was to tie the invites and additional pieces together with some bakers twine and a small piece of Cedar from our backyard.  We handstamped the rsvp envelopes and then I choose to hand calligraphy all the invites by hand. 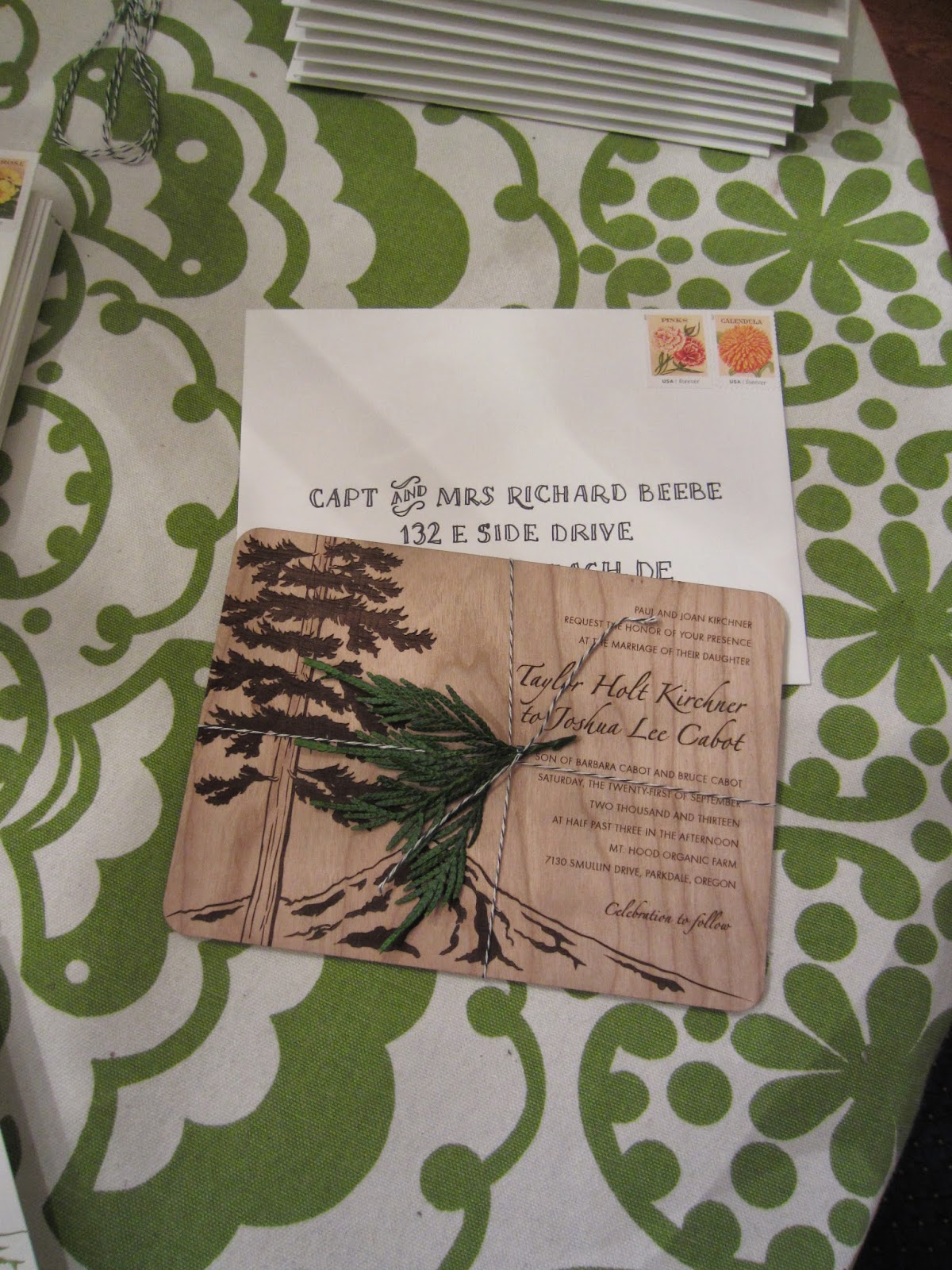 For the day of, we picked Mt Hood Organic Farms for its scenery and all the different architectural buildings that allowed us to have both indoor and outdoor aspects. We knew we wanted to get married outside with a view of all the beauty Oregon had to offer. 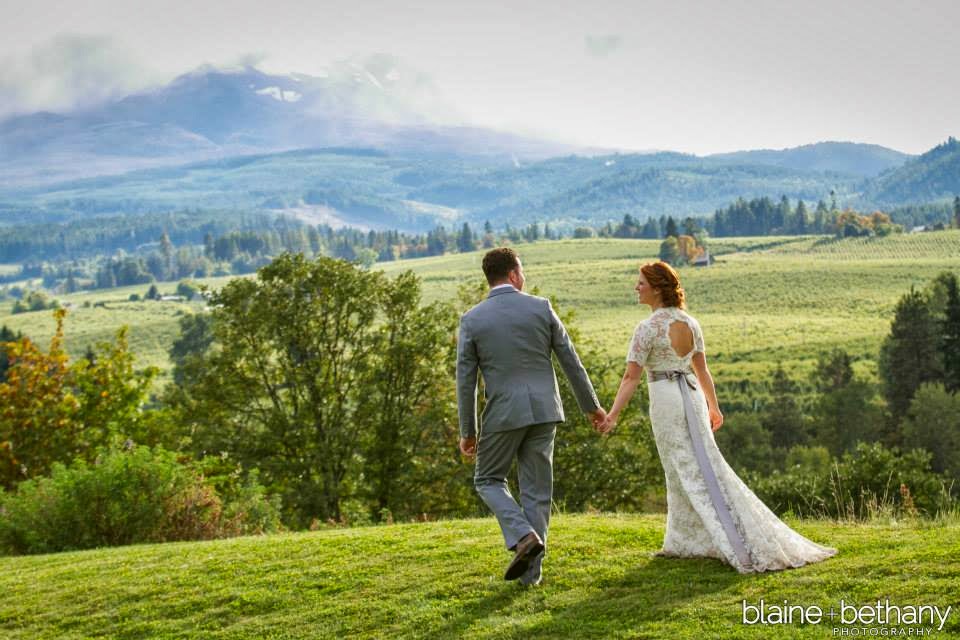 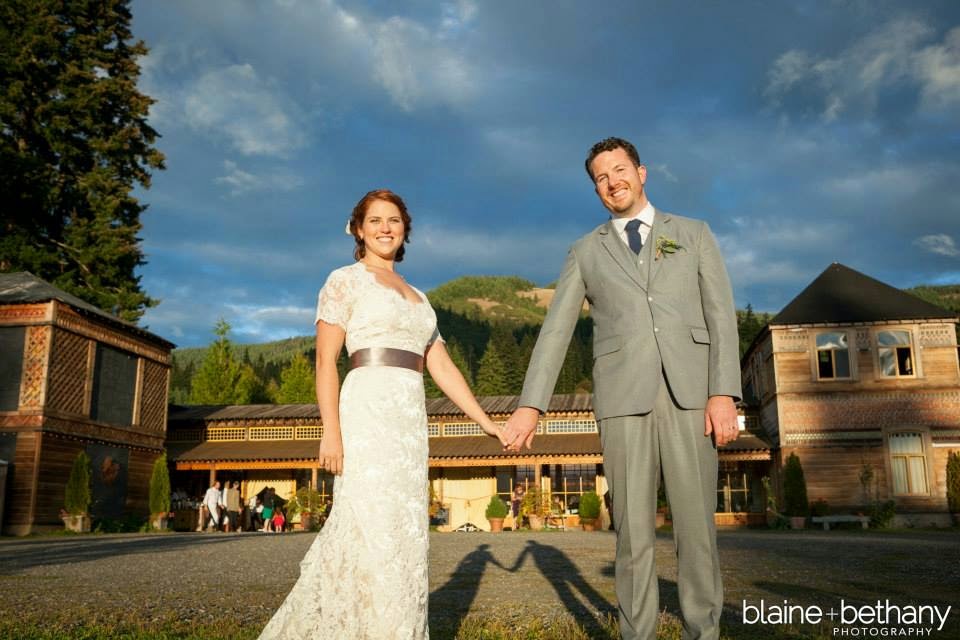 For flowers we used my existing large collection of vintage blue mason jars and used as much local in season flowers and greens as possible. 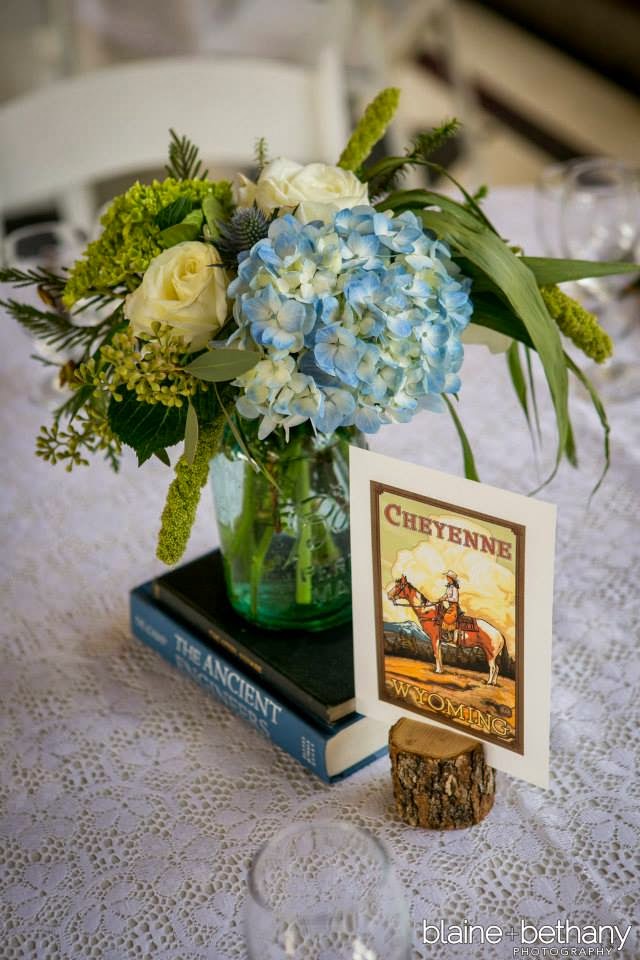 Our table assignments stemmed from the idea that each table would be a place we had visited together. We found vintage travel posters for each location and placed them on the table. Guests found their names on a luggage tags that directed them to their specific table. 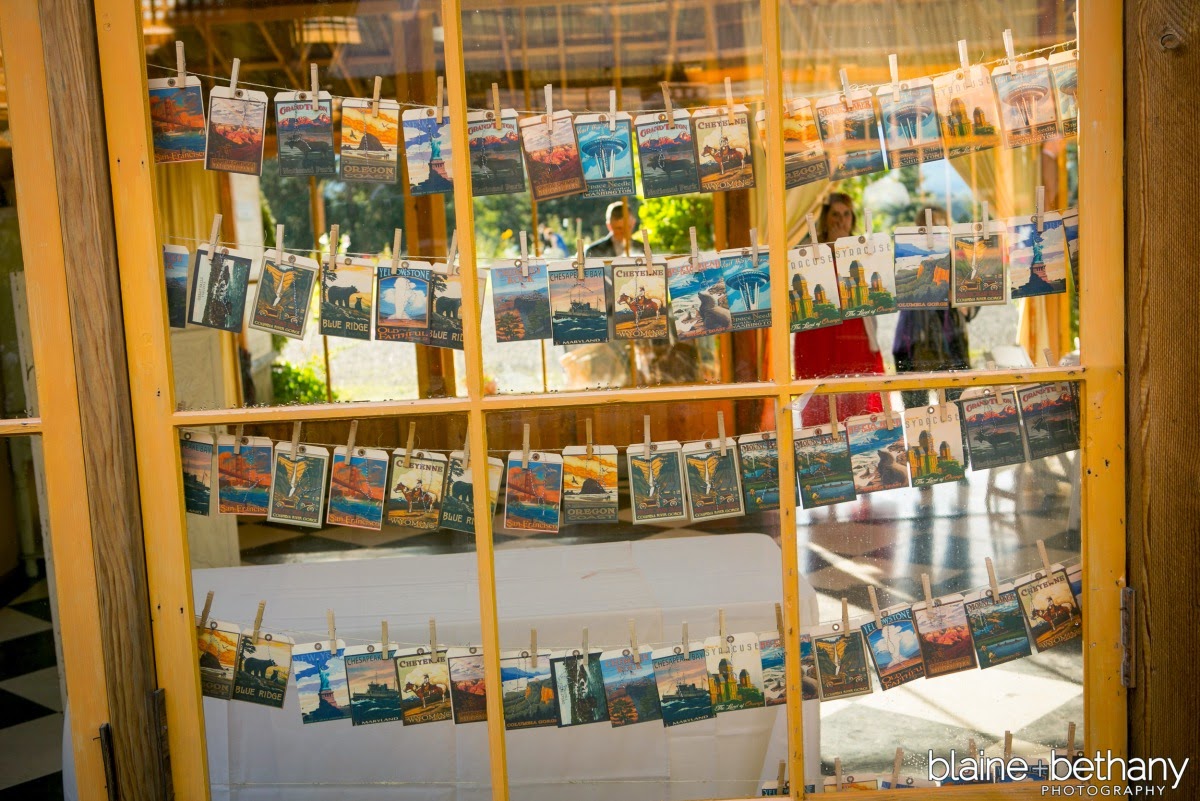 We choose to hire a second photographer to run our photobooth.  Rather than have props we choose to rent an old Victorian couch that moved throughout the event. 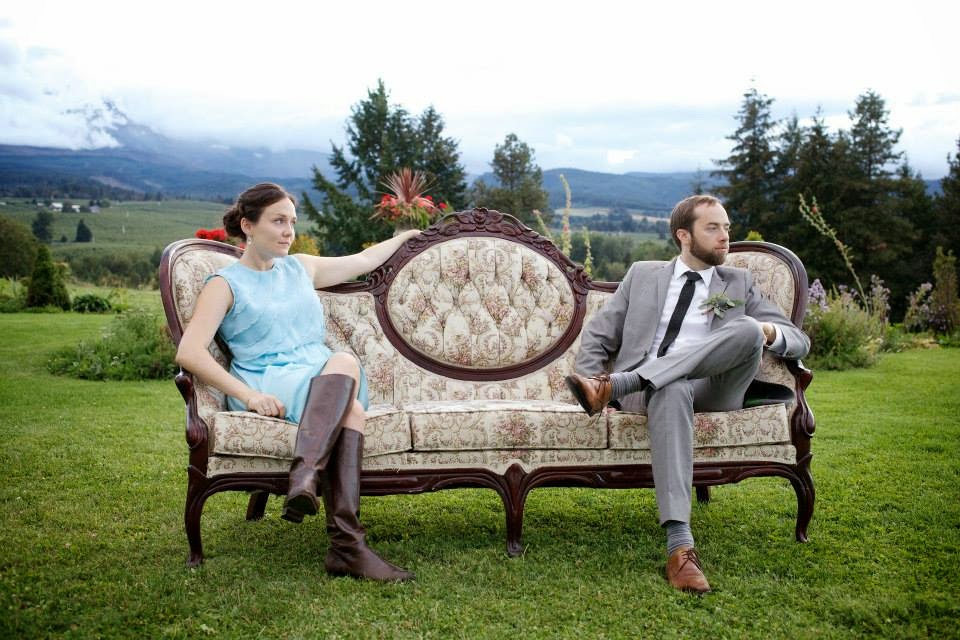 For our outfits we tried to go custom. I knew I didn't want a strapless dress from day one. Then meant I had to make my own semi-custom dress by ordering additional lace that allowed my seamstress to design the sleeves and a key hole back I wanted.  Josh got a custom made three piece suit from a local company. We decided to go with a neutral gray color and then added buffalo nickels for buttons to pick up on Josh's Wyoming upbringing. Gus was our ring bearer and had his own bowtie and a custom made pillow. 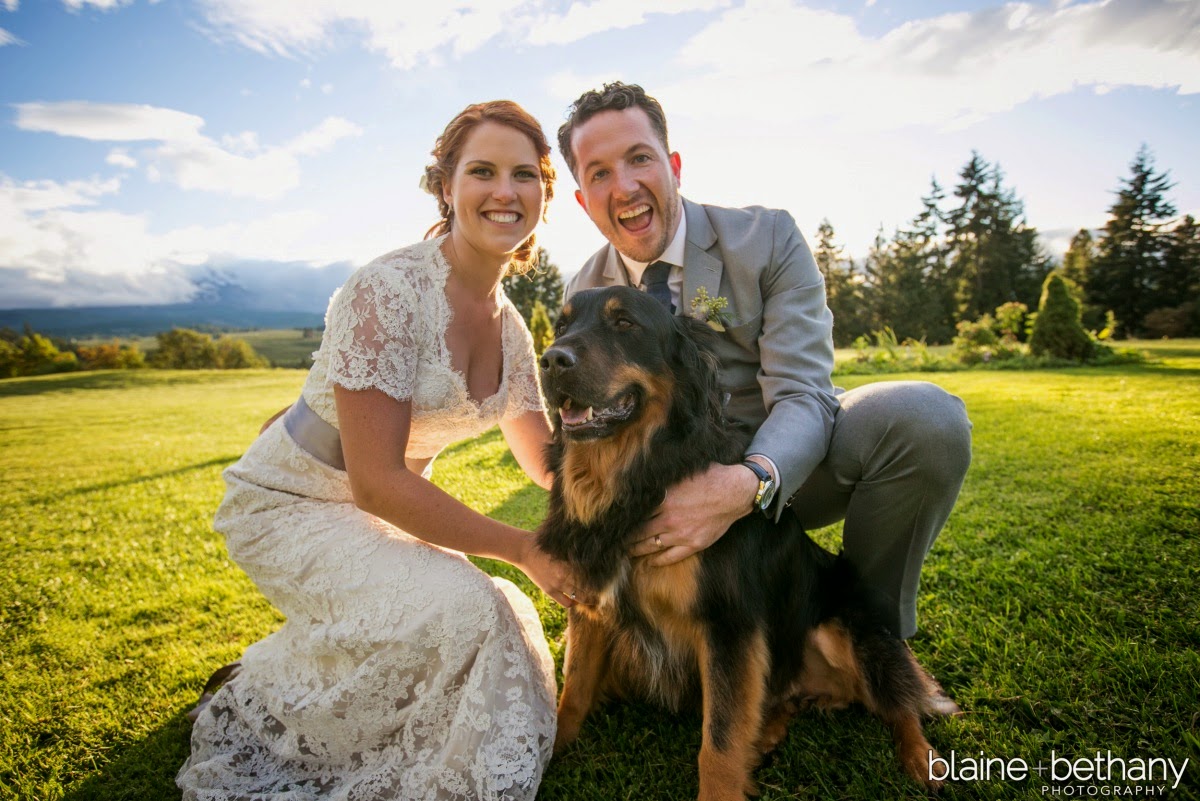 It was an amazing weekend of events which included a night of pints and pies on Friday, the wedding on Saturday and a house party on Sunday.  The house party may have been the death of me.  Small projects had to be completed, windows were cleaned, landscaping was spruced and the house was uber cleaned. See I still made this post about the house! 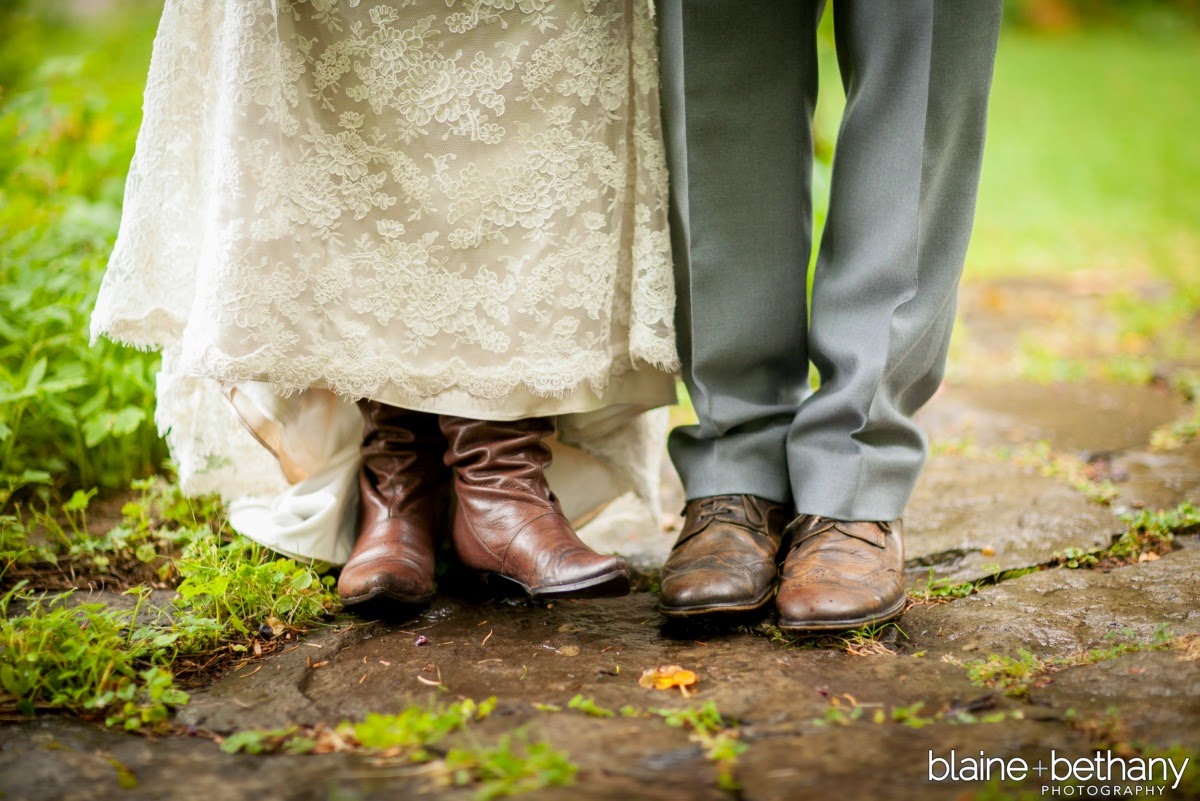