Adults Have Dining Rooms... Now I Do!

July 2010
It was now July and we had moved into the dining room.  I want to start by saying this is my favorite room in the whole house. It was probably one of the reasons I agreed to buy the Castle.  The room is almost a square, which is my favorite shape for a room.  There are two large windows on the East and a set of small English Cottage style casement windows (you know the ones you see on Masterpiece where the farmers wife puts her head out the window and calls everyone in for supper, those kind).  The room has an original built-in and a small arch over the windows.  This is probably too much information, but I am an architect and I get excited about these things. 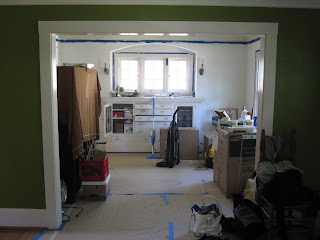 I wanted to make the dining room feel intimate and cozy, the kind of place you can sit with friends after dinner for a long time.  We decided to go with a warm dark chocolate color in the space.  This ended up being harder then we thought.  Did we want a blue brown, a red brown, or a purple brown... ummm kinda just wanted dark chocolate.  In the end, we chose Benjamin Moore Barista and I am very happy about it.  This room had a lot of damage to the trim work and we ended up tenting the doorways off and sanding for many many days.  This was also the point in the project where we stopped hand sanding and bought an orbital sander... why we did not do this earlier? I can't really tell you, but it makes life o so much easier. 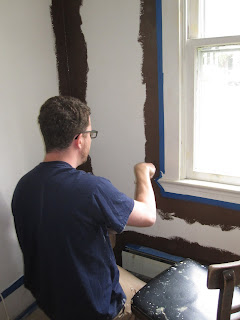 After a week of sanding we got about priming everything in the room and applied the Barista, it went on like fudge.  It was so delicious looking I felt tempted to eat it several times when it dripped on my fingers. Over share, maybe? This is a much smaller room than the living room and only required two coats, phew. We removed the tenting and got to work painting out the trim each night. I was really excited to see this room happen because we have never had a dining room and it felt very grown-up to have one.  Also, its right off the family room and I have to look at it every day. 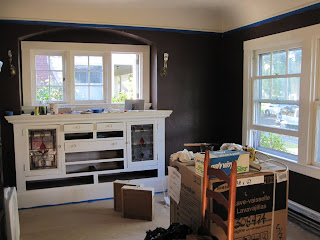 Posted by Taylor at 7:03 PM No comments:

Living Rooms Are For Living

June 2010
At this point, we are about two weeks into our house owning adventure.  Josh came home every night and dutifully worked on the living room.  I helped taping, caulking, and scrapping paint off the windows.  Finally, late on a Saturday night we realized... we might be done?? 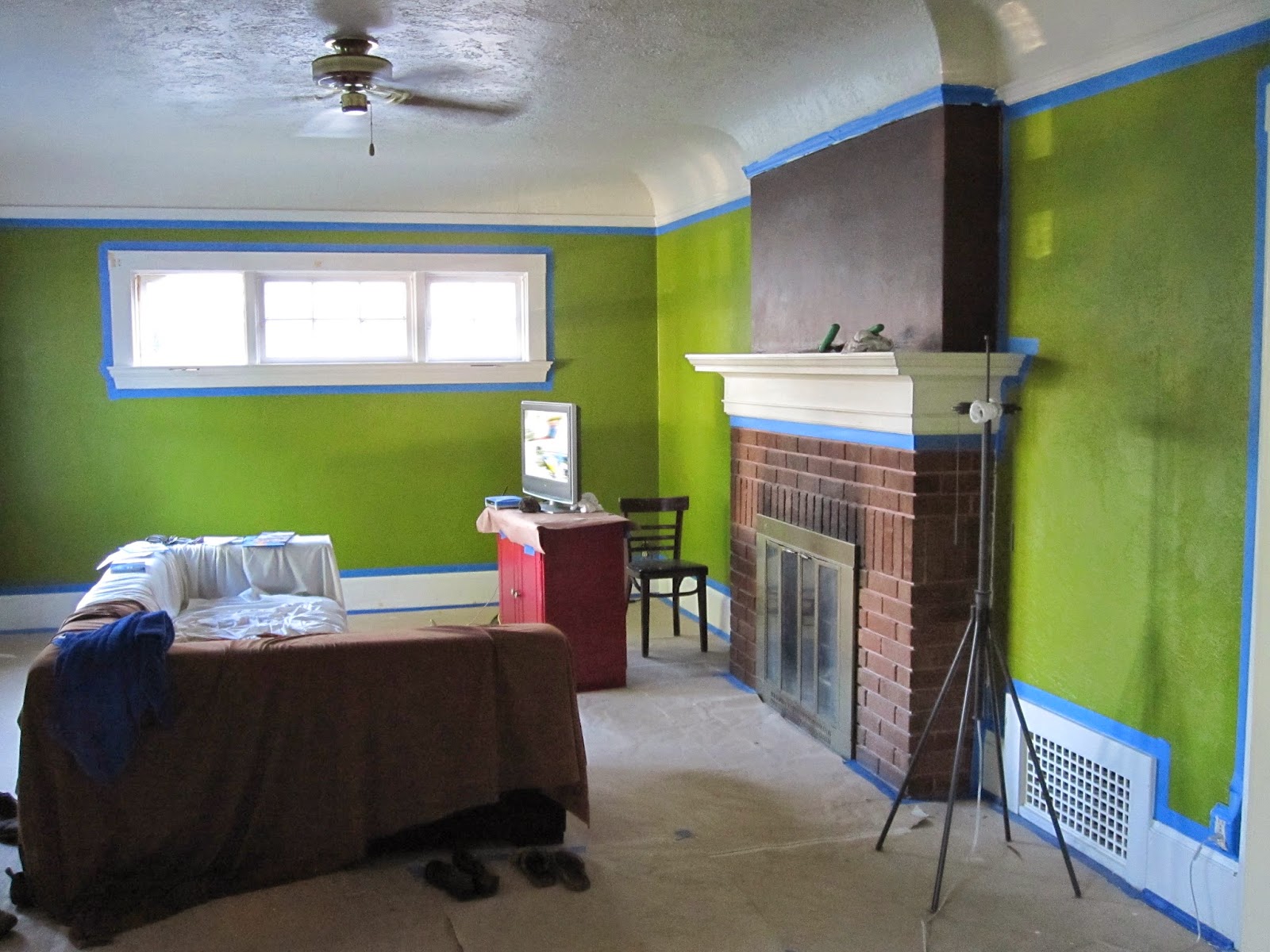 We pulled up the paper on the floor and looked at our new walls, new floors and new paint and there was a wonderful moment of exhaustion fueled satisfaction.  However, it was also 11:00pm and there was no way I was moving furniture.  I cleaned the floors and woodwork and then went to bed.  If I wasn't so dang tired I would have thought about this all night... The best part of moving and projects is unpacking your stuff and making the room yours! 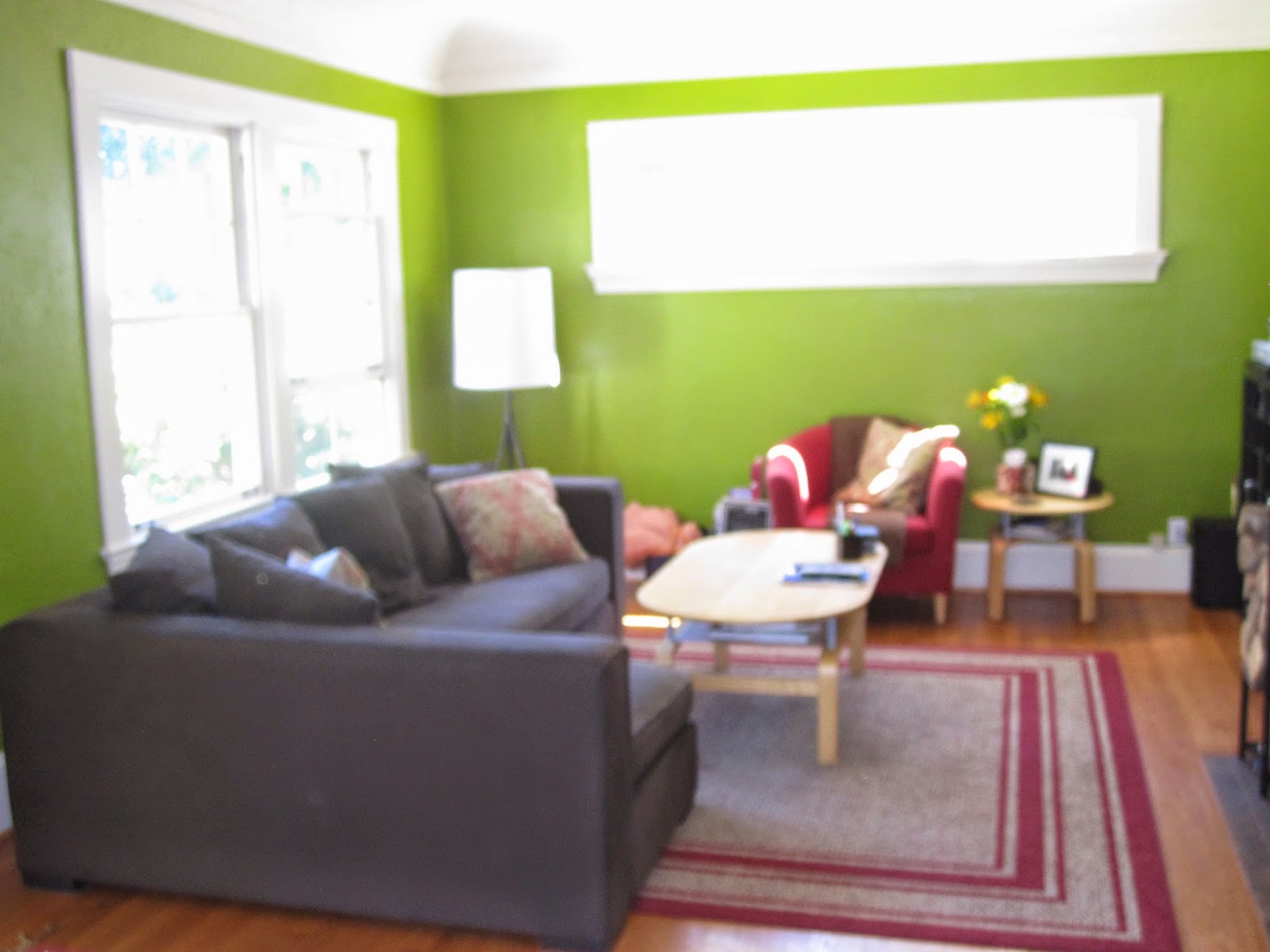 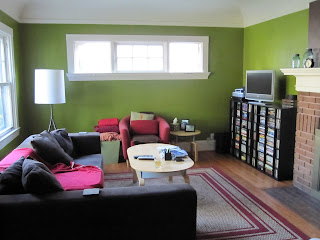 The next morning we went into our 'hoarders room', or as Aunt Cindy termed our 'room of requirement' and unearthed our two area rugs, coffee table, side table, chair, blankets, tv stands, hall table, lamps and pretty much proved that the back bedroom was Narnia because there was no way this all was in there.  As each item went in... it fit!  Yay, no new furniture! And I got to unpack about 16 boxes of movies and cds.  Hello, living! 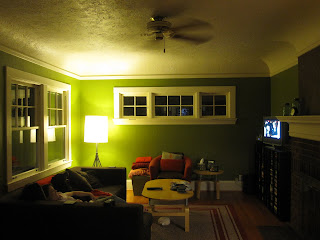 Posted by Taylor at 8:22 AM No comments:

Upon moving, we still had a ton of work that needed to be accomplished.  For the first two weeks we entered a time period I like to term 'house camping.' Half the rooms were not even started, others were halfway, some were future projects.  We asked the movers to pile everything in three spaces, the back bedroom, the basement, and the office so we could work away in the other spaces. 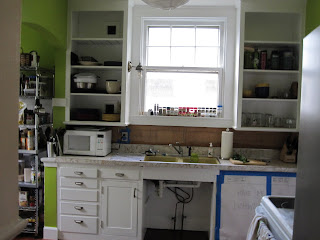 Kitchen:  At this point I had finished painting the upper cabinet and installed cork liners. I had also finished up all the painting on the walls and trim.  The new fridge was in, yay!  We were half way unpacked.  In a moment of pure frustation, I pulled the backsplash off.  By backsplash, I mean faux sandstone exterior metal paneling.  It was special, and I was happier with the particle board backing (Josh was undecided).  I was still scrapping and priming away on the lower cabinets and drawers every night after work.  I went to Restoration Hardware and got some new kitchen hardware that was traditional in the bin pull fashion and modern in it's clean lines.  I think it was a good compromise between our two styles.  Camping rating 2 out of 5 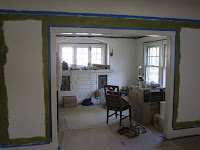 When we moved in the the only thing we had completed in the family room was the putting two coats of paint on the ceiling.  We tried roughly 6-7 different paint swatches on the wall trying to get the right gray/green.  We first tried the colors from our old apartment, which we loved, however, these just did not work in our room.  This was a learning experience, what looks amazing, rich, antique, and warm in your west facing 100 year old apartment, does not necessary give the same feeling in your smaller, east facing, 80 year old house.  All the colors appeared dull, washed out, and sad.  We started going more and more green, until suddenly we found ourselves with Dark Celery.  This was a mix between army green and fern gully.  Dare I end that statement with 'in a good way?'  After much debate Josh started painting and we soon realized our small family room was quite large and required a lot of cutting in.  There are three doors, 5 windows and one large fireplace.  So we painted, every night, every weekend, 4 coats in all.  All the while, the only thing in the family room was one couch (covered in a sheet) and our tv, on the ground.  Camping 4 out of 5 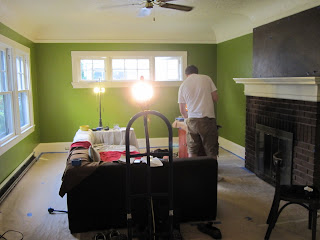 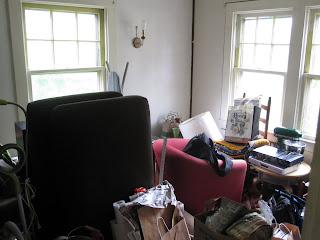 In the meantime, 90% of our belongings were in the back bedroom.  We called this the 'hoarders' room.  There were boxes of dishes, bags of food, books, lamps, boxes of kitchen utensils, rugs, side tables, and pillows.  Everyday we had to go into the room for something, it involved stepping precariously through a warren of objects and junk to dig in a box.  The best part is that once you had used the item you had to bring it back to the hoarder room because there was no place for it.  We bought a house to have more room and now we were back to living in about 500 sqft, which consisted of a small bathroom, half a kitchen, and a bedroom... lovely. Camping 5 out of 5

After three long weeks of house prep we were getting ready to move in.  We had help from friends and help from outsiders, but in the end, sometimes you have to shell out the big bucks.  Everytime Josh and I have moved, which is about 13 times in 12 years collectively, we have always done it ourselves with a friend or two to help.  This time, I made the big leap and called a moving company to see the damage.  We had already moved all of our boxes, clothes and loose items over.  We just needed the man power to move couches, dressers, beds, and various other 'very heavy items.'  The guys showed up and moved everything out of our apartment in 45 minutes... no joke.  They then moved everything into our new house in 1.5 hours.  Josh and I were in shock.  This is amazing, this would have taken us all day, we would have sweated, cursed, gotten in about 15 small fights and damaged half our belongings.  Instead we found ourselves at 1:00pm standing in an empty apartment.  Wow, worth EVERY penny.
We realized pretty quickly (ie. the first load) that the washing machine at our house was shot, we also left the refrigerator out on the porch for two weeks.  When we opened it we were pretty sure a crime scene had taken place.  This called for one thing: an appliance buying binge.  Luckily, we were looking to buy appliances in the sexiest time of the year for that sort of thing... Memorial Day weekend. 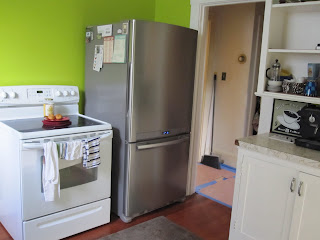 We went to Lowes at 8:00pm on a Saturday night and set about buying.  All appliances were 10% off, not good enough you say... well all Samsungs were 20% off on top of that... still not impressed?  O yeah and free warranties, free delivery, and free take away.  Well Mr Lowes salesman you are about to sell shiny objects to us today!  That night we bought a new shiny stainless steel freezer bottom fridge! Yay! A new dishwasher, even though there was no existing dishwasher (this is America gosh darn it)... we were gonna make it work!  And a VERY fancy steam washer and dryer set.  It was crazy and exciting and overwhelming.  Luckily, we have amazing parentals and they had agreed to make these 'home buying' contributions.  This was HUGE in our books! 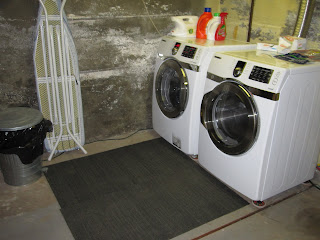 On Sunday at 7:00am they delivered the first big purchases of our adult lives (minus the house of course).  We were very excited! 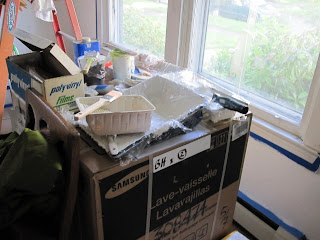 Please note that a dishwasher can also make an amazing paint table for 2 months.
Posted by Taylor at 5:58 PM No comments: