Battening Down the Porch

You have probably seen most of this post in the earlier photos but here is some more back story.  Once we had finished the beds and laying out our paths we still need to install them.  The concrete pieces were all different heights and so we needed to use mortar to set them level and flush to one another. 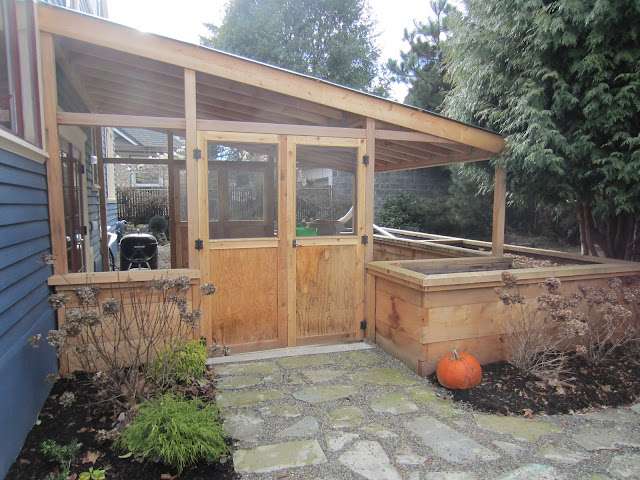 This is a backbreaking process which we did in the rain.  Which is most likely why we did not photograph any of it.  First we had to dig out some areas as well as raise some other areas to get the stones to line up.  If we had actually used pavers this would not have been a problem.  With nice normal stones we could have laid a nice level bed of sand and simply tapped them into level.  But that would be easy and where is the fun in that.  Instead, our reused concrete bits required a fair bit of wrestling.  To say we got them all level would be a complete lie, this no ADA accessible pathway.  But for all intensive purposes it is perfect, it's a pathway of stones that you can walk on.

Once the pieces were level we used mortar to set them.  This required roughly 12 bags bought at Lowes and simply mixed with water.  We chose to mix one to two bags at a time in our wheelbarrow with shovels and trowels. It was a bit of an inexact science, some mixes being more of a slurry and some being closer to sludge but in the end it didn't make a big difference.  If you are thinking of doing something similar I suggest more of the sludge consistency.  This helped us level some of the stones.  We spent the entire morning on our hands and knees shoveling and eventually grabbing handfuls of the mortar and placing it under each individual stone. 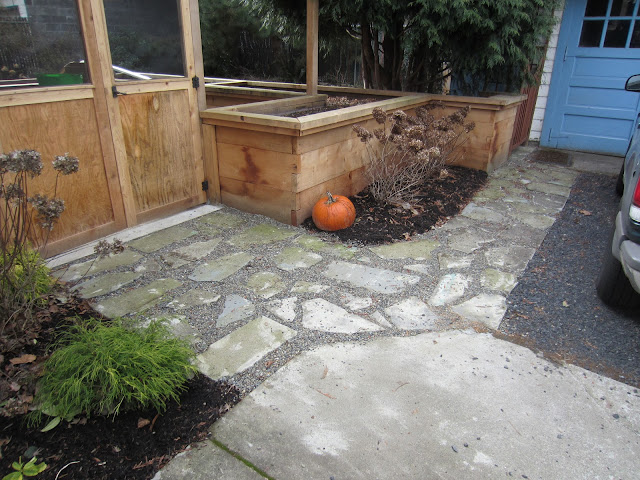 Once we had set all the stones we reused some existing pea gravel we had on site to fill in the gaps and create a level surface between the stones. We waited about 24 hours before fully walking on the surface and sweeping the excess pea gravel off.  When we were done I have to say it looked pretty darn good.  When you consider the concrete was free and the bags of mortar are about 6-8 dollars it was pretty cheap. We used some existing pea gravel, but if we had to buy it I would say it was about a yard which is about $80 plus delivery. 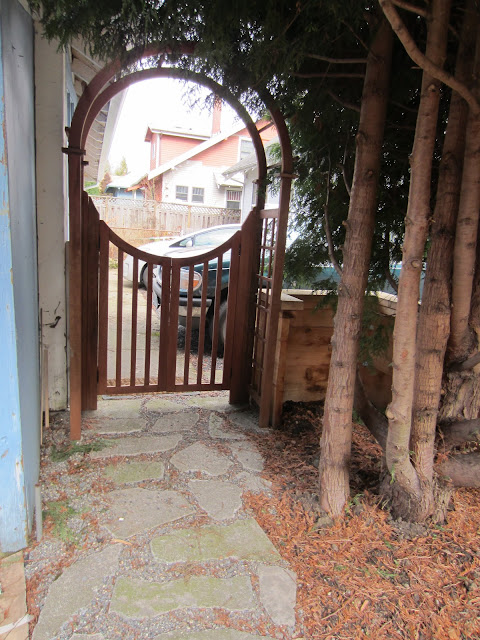 It was starting to get cold and rainy in Portland and we had run out of good working days to keep going.  I took advantage of some falls sales and grabbed some hydrangeas at 30% off.  I planted three white lamb hydrangeas along the beds and purchased a large Limelight for the corner under the kitchen window.  Honestly, I cannot wait to see them bloom, because buying twiggy dormant plants took some imaging. A few plants that were not successful in other parts of the yard also found their way over to the corner to provide a little bit of evergreen color. 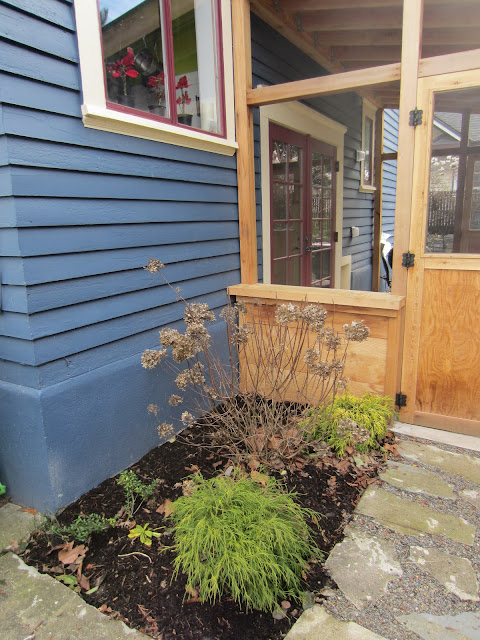 The last step before we could call it good for the year was to install some doors on either side of the porch.  The doors to the driveway were a definite need as this was the last step to enclosing the backyard and allowing Gus to use his dog door again.  Our friend Gordon, a la dishwasher, staircase beadboard fame, made us some doors and we put them in late October. They look a bit silly since they have their screening and nothing else does.  But it made the project feel more finished! As the rains kept coming we battened down the hatches on the back porch with promises of more work next spring.