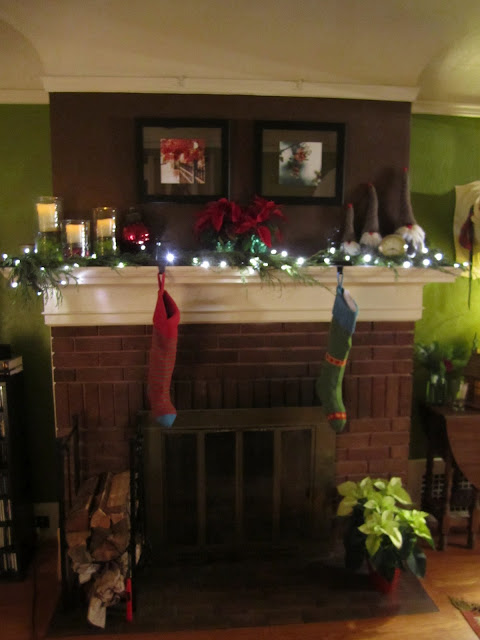 As I have mentioned in the last three posts, we got a chance this year to do Christmas in our house.  For the first time we bought a fresh Noble Fir at our local stand.  Insert, we also had to buy a tree stand, ornaments, Christmas lights, etc.  We also got some fresh cedar garland for the mantel and for around the front door. It was fun putting everything out and about. Small decorations were spread out around the house: vases of red flowers, red bead garlands and some plaid bows. We lite up our lone tree in the front yard and put some lights on the porch. I bought adorable ceramic and twig reindeer to protect our front door and even our buffalo head got a little sprucing up. 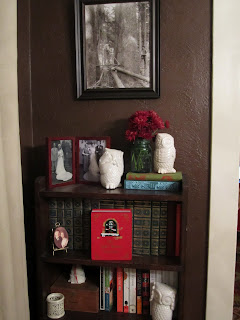 For the mantel, I hung out stockings, added some poinsettias and hung some winter photographs on the wall.  In the dining room, I used our freshly stained built-in top to put up a collection of ceramic snow village houses my mom used to collect.  When I finally bought my own house she let me pick out my favorites and sent them along so I could have my own little village.  This always fascinates people who come to visit, one because they are beautiful and all lite up and two because 26 year olds don't normally collect ceramic Christmas houses. 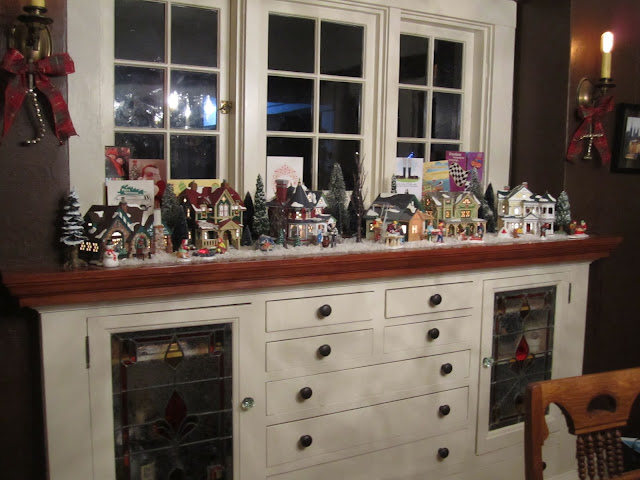 This was also our first real 'party' at our house.  So we broke out the few nice plates and serving dishes we had.  We set up a drink station in the family room with warm spiced cider and a vintage red coleman cooler filled with wine and beer.  For the first party I made a gluten free cobbler, and a fresh apple pie, we also bought some cookies and a pound cake from Whole Foods.  For the second party we bought a honey baked ham, I made fresh biscuits and cut up fixings.  I made homemade cranberry sauce as well as spinach and artichoke dip. We also made New England clam chowder and served them in espresso cups, which was a huge hit!  It was great to see family and friends and I think we made a good showing!  Happy Christmas! 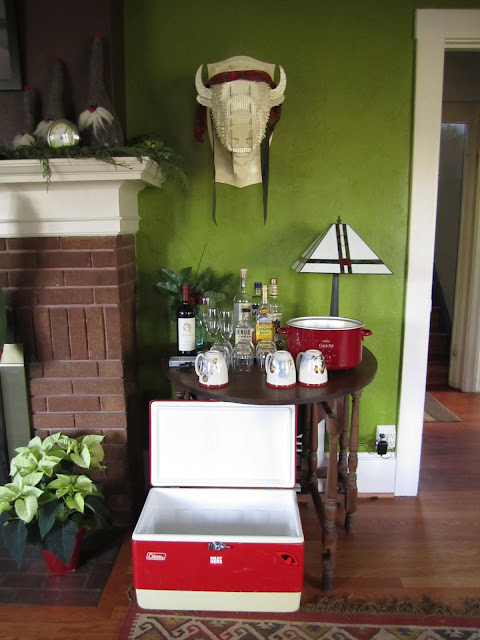 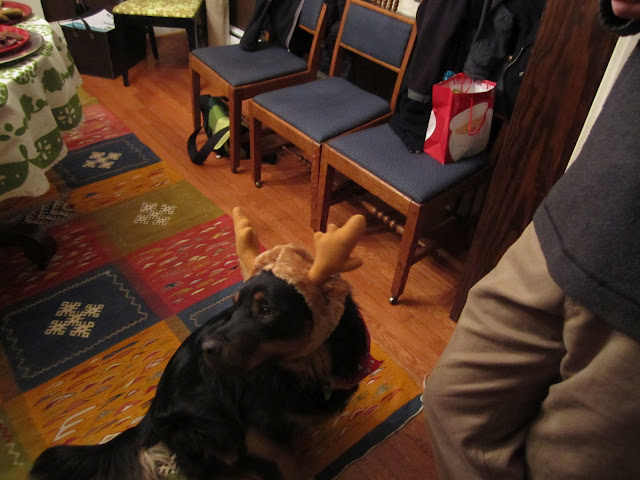 
This year we decided to spend Christmas in Portland, which was super exciting.  It was our first time staying home and would be our first opportunity to really celebrate in the house.  Of course, we could not just sit back and relax?  Apparently working on your house 24/7 doesn't end for the holiday season.  So, Josh and I decided to host a small Christmas party of desserts and drinks.  Then as luck would have it, we offered to be part of our neighborhood progressive dinner party which happened to land the following night December 26.  Yup, that's two parties, two different menus, in two days, gulp. 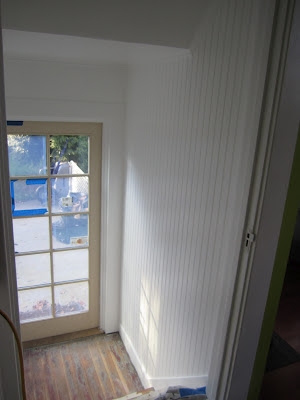 As if this wasn't enough, this would be the first time many of our friends and neighbors had ever seen the house.  Which put the pressure on to finally deal with a lingering project to nowhere: the mudroom.  As you may remember, back in July we installed beadboard in the entire space.  In August, we rented a belt sander and sanded the floor boards.... then nothing happened for a while. Then we sanded the ceiling, only to realize we had to skim coat it again, so we sanded it again.  Are you seeing where I am going?

Well it was a little over a week to Christmas and we needed to at least make the room presentable.  We primed the entire room and set about painting all the walls, trim and ceiling a nice fresh white semi-gloss.  One coat went up, then two, the wood was soaking all the paint up like sponge, I seriously didn't know if I could keep painting the same space every night like this.  Finally, we tried a third coat, it had to be deemed good enough and we stopped at four coats of paint.  This made a huge difference in the room!  So bright and so fresh.  We were excited and couldn't wait to paint the french doors. Except we soon realized they had to be open to painted?!? Since it was about 30 degrees and rainy in Portland these doors were not getting painted anytime soon.  Total fail on our part.  We had three months of perfect weather in which to paint the doors and well... it looks like it would be almost a whole year before it happened.  So please ignore the ugly preprimed beige doors. 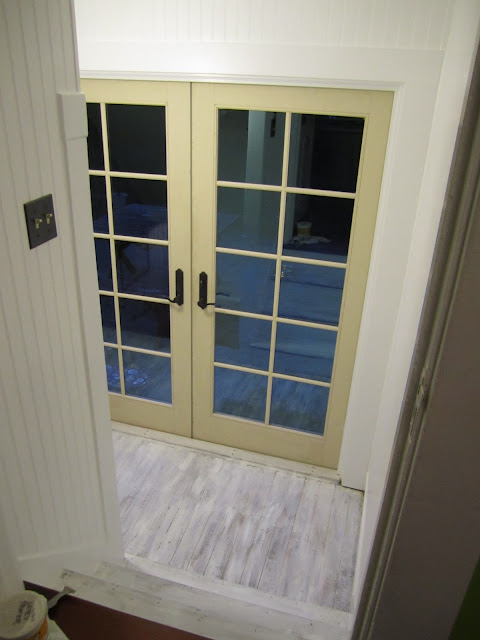 I will take a break from this failure to show you a picture of our amazingly cute sconce we added to the mudroom.  Prior to this addition there was no light in the space, not one.  Making trips to the basement or outside at night was an 'at your own risk' adventure.  Then I saw this little guy and decided he should come home with me (I am glossing over the fact we had to bring in a electrician to actually make it light up). But that aside, its adorable and I love him every time I go down to the basement without tripping and dying. 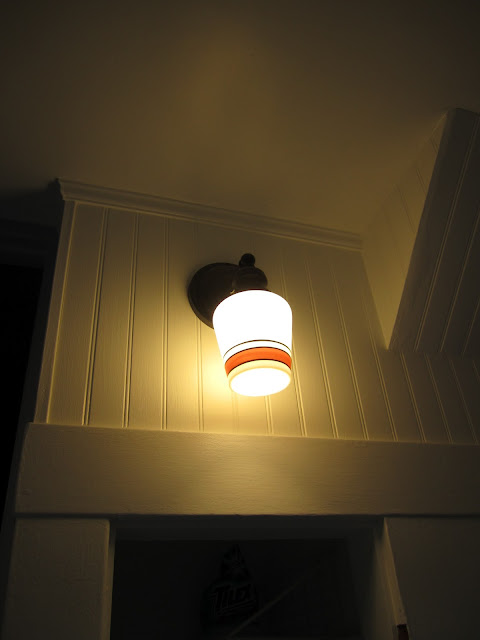 With the door failure looming we decided to paint the floor.  I primed the bare floor boards, which kinda gave it a fun whitewash effect and then Josh painted the floor with crisp porch paint. Two coats, one of which was done on Christmas Eve.  Yes, we painted the mudroom floor on Christmas Eve, Josh was at until 9pm.  Fumes be damned this would be our Christmas miracle! We pulled it off and shared a glass of wine before passing out.  Now I just needed to start contemplating two parties to cook for. 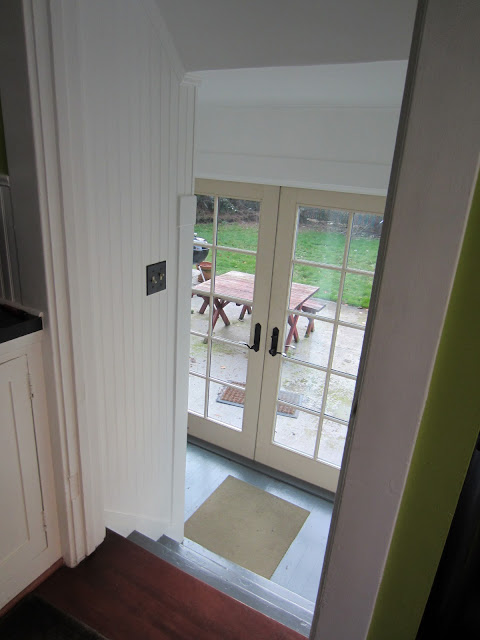 Posted by Taylor at 9:18 PM No comments:

Neighbors, we now have curtains. You're welcome.

November 2011
We spent the remainder of 2011 doing small but totally satisfying projects.  This was going to be our first real Christmas in the house and I was a little excited, o hell, I was VERY excited.  But along with the excitement came the o my goodness feeling.  We had nothing in the way of Christmas decor.  Everything had to be bought: tree stand, tree lights, ornaments, general all over flare.  In preparation for this we stepped back our remodeling. 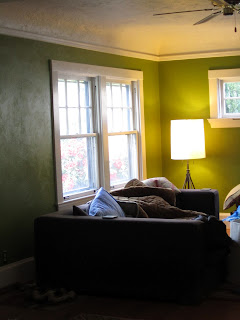 We decided in November to tackle a small project which should have been done when we first moved in... curtains.  Yes, we have now lived in the house over a year and a half and currently own/hung zero window treatments.  This makes for some interesting moments.  I change in our upstairs hallway, to avoid changing in our curtainless bedroom, we also try to monitor our family room tv viewing since there are no curtains, HBO you're out.  I know to many people this is unimaginable, but honestly, I kinda hate curtains.   I love a nice open window letting our little bit of Portland sunlight in. It's also super annoying to daily open and close them, which means sometimes they are left closed even when you want them open... big bummer.

But the point of the story is, we finally got curtains for the family room and dining room.  Since the rooms open on to each other we decided that we should use the same ones in both rooms.  This limited our choices dramatically since the rooms were different colors.  We went towards solid neutrals.  We finally decided on some khaki grommet type neutral numbers from Plow and Hearth.  They were super cheap and apparently they have thinsulate in them.  Apparently, when we pull them they can actually act like a layer of insulation... I am not quite sure about this but it was worth a shot with our drafty windows. 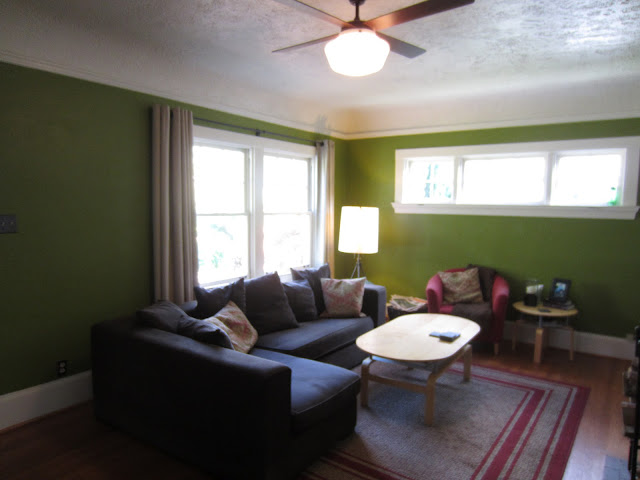 I ordered the curtains and then...they sat in the guest room for over a month.  The next step was picking curtain rods. This was also quite a process.  To start I hate finials, so we had to find curtain rods without finials on them.  I finally found ones I really liked at Pottery Barn.  They were more than I wanted to spend, but they seemed really solid and didn't have a huge ball, or ornate spike in site.  After a couple of misfires I ordered them online and went about ironing 4 7'x5' panels.  Phew.

We decided one Sunday to install them.  This was a bit of trial.  Since I chose grommet top curtains and these rods had integrated brackets we had to hang the curtains on the rod and then screw it into the wall.  So much for cleaning them once a year.... Since we had plaster walls we had to carefully predrill and then install some plastic anchors into the wall.  This is definitely a two person job.  The rod has to be held, curtains rangled and the screws often did not exactly go in 'easily.'  In the end, we got pretty good at it and we stood back to look at our handy work.  Wow, it did make a difference!  The rooms felt more warm and lived in.  I now had to admit we might need curtains.  I am also sure the neighbors were very happy. 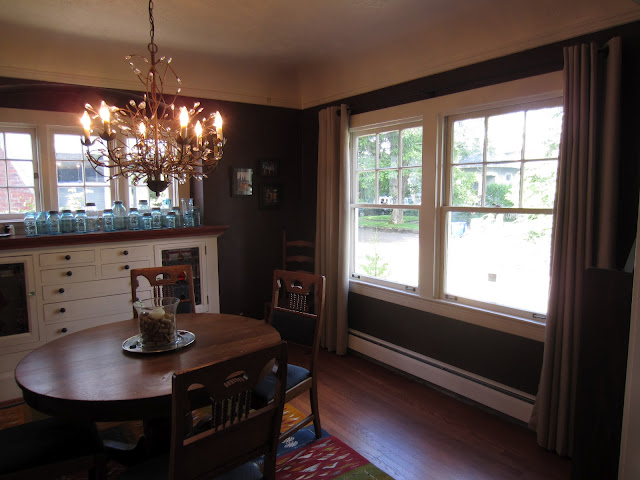 Posted by Taylor at 6:46 PM No comments: