Since Josh had created a nice pretty foundation for his beds and is the builder in the family.  I was left to my own devices.  You really don't need two people in a wood project.  My main purpose was occasionally to help carry a long board, or hold something in place.  I occupied my time doing some pruning (aka attacking the jungle that is our backyard).  I also cleaned the garage (shocker) and generally kept house life moving forward. 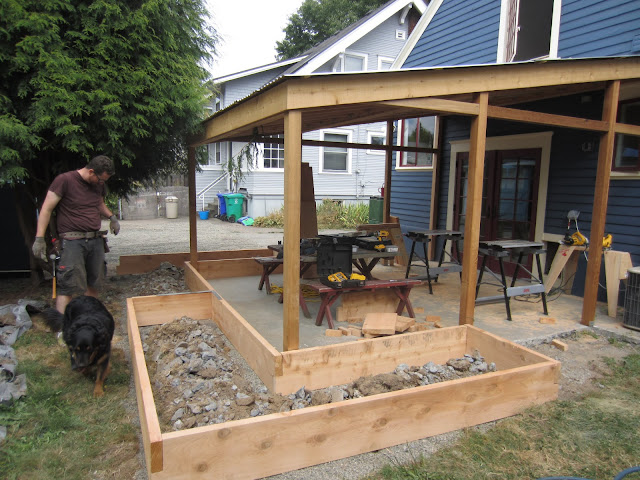 We wanted to match the raised beds we had done two years ago, so Josh notched each board so that they dove tailed together.  It was a slow process.  The porch cover was mostly square, the concrete patio beneath it was completely un-square and our rough sawn lumber was a little 'organic'.  By the end of Saturday we only had one layer of 2x12s. The next day Josh finished the second layer of 2x12's and added a 2x6 ring around the top to bring the beds up to 32". We still had to add our cap which was made up of a 2x4 and a 2x6  so our total height would become 36". This was deemed the appropriate height for me to be able to reach the back of the beds and not be so low it was a potential knee basher. 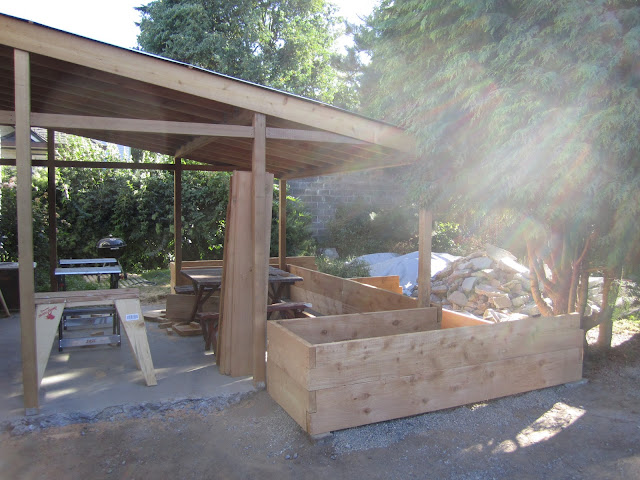 This time Josh used screws to the hold the beds together.  On the front, we had used nails, but over time the weight of the dirt and the swelling of the wood had led certain pieces to shift and gaps to appear.  We hoped screws would stand the test of time since their threaded ends would bury into the wood. To attach each ring to each other we used simple stainless flat brackets and screwed them together. We did this about every 2-3 feet to stop shifting.

Once the walls were up and before we put the cap on my job came in. We decided to wrap the interior of the wood beds with plastic.  I am sure it would take MANY years for the raised beds to rot through solid 2" cedar but we felt better making sure our wet Portland dirt wasn't sitting directly up against it.  I lined the sides and simply stapled the tops to hold it in place.  The cap will cover these staples so I was not worried about making it look pretty. Once that was done we started placing our huge pile of concrete in the bottom. 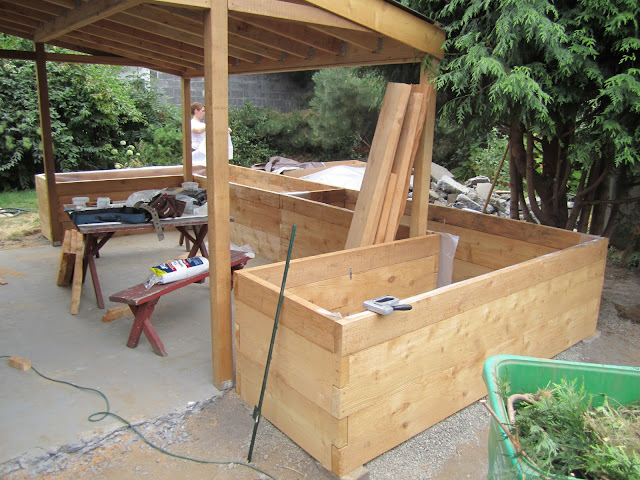 There was multiple reasons for this.  1. We had to get rid of all the concrete and we're too cheap to get another dump bin 2. This would actually provide some drainage for the beds so that they didn't stay too wet 3. This would prevent groundhogs/moles from getting up into the beds 4. Zombie land protection. Seriously, it was insane, we took all the biggest pieces and the smallest pieces and piled them in and pretty much were creating a castle wall. This porch could withstand a siege. While we were putting the pieces in I talked to Josh about something I think about often. 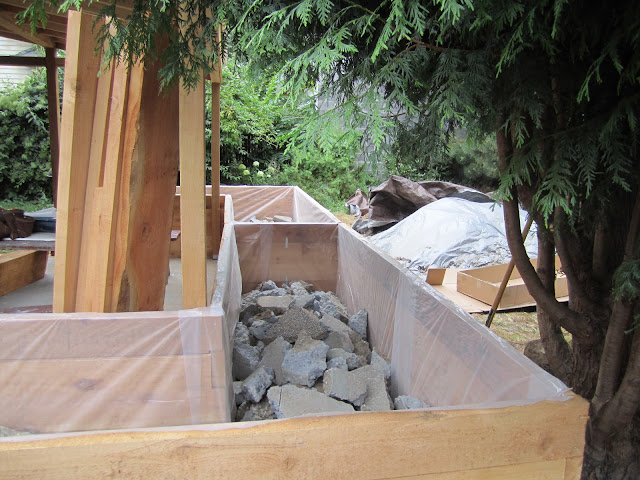 "Remember how when we do projects and we open something up and go 'WHO WOULD DO THIS?' because someones earlier laziness/cheapness/lack of knowledge is now making our life so much harder? Yup, we are doing that right now." Some poor soul will at some point need to remove these beds, either because they don't like them or they have started to rot.  They will believe it is a simple wood bed filled with innocent movable soil.  Instead they will encounter 3 tons of concrete chunks at the bottoms and curse us.  I wonder if I will feel it when it happens?  Will I be 45 standing in my kitchen and feel the hair on my neck stand up- that will be someone discovering our little secret. 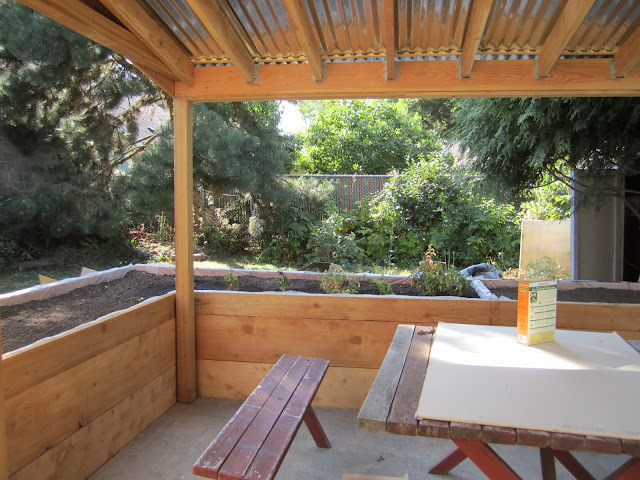 In the meantime, we got rid of 90% of our concrete and then started on the dirt pile next to it. The year of piles was slowly coming to end! Yay! 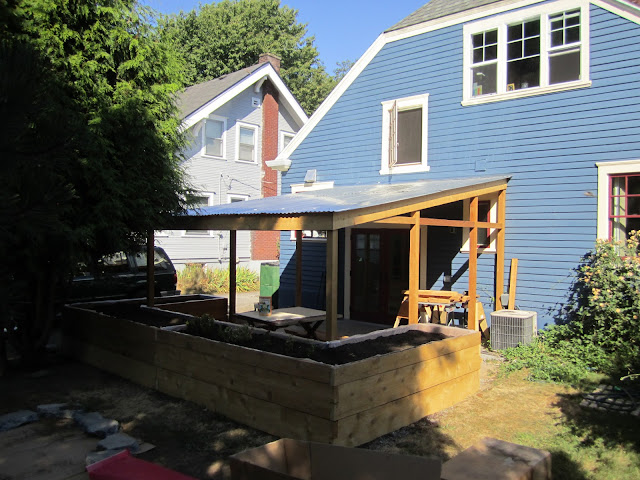 We were so impressed with how quick and easy the back porch cover went up that we didn't fully estimate how much work we still had to do.  We were really only about 1/5th of the way into the project.  Our next step was to remove the remaining concrete that surrounded the porch that we longer wanted or needed. 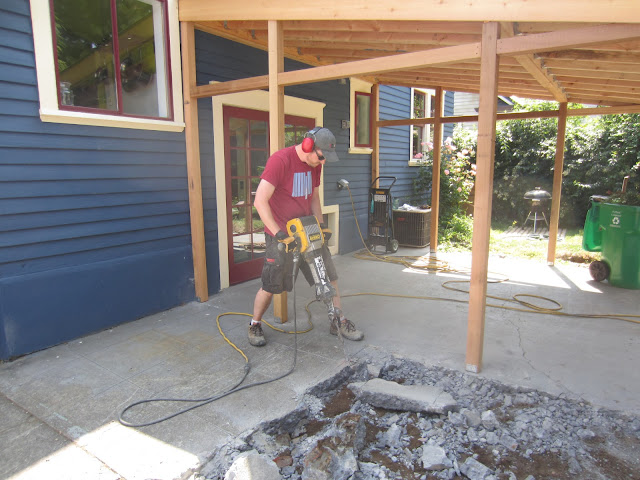 We had cut the concrete back in May when we depaved the driveway, but due to the unexpected depth, we realized we would not be able to remove the pieces in slab form and would instead need to break them up further with a jack hammer.  I was honestly dreading this part more than anything.  We had spent three weekends already jack hammering and moving large concrete pieces around.  I had breathed a sigh of relief when they removed the dumpster a month earlier.  Now here I was again. 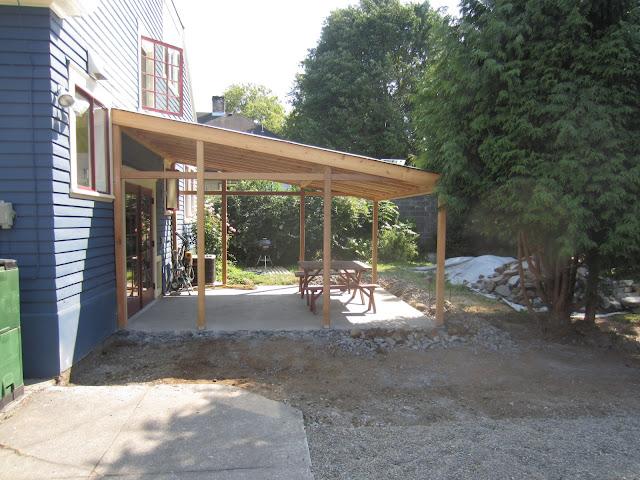 The good news was that the weather was much better.  Also, our friend let us borrow a jack hammer so we did not have any additional costs.  Since Josh was a pro at it we devised a system where he jack hammered a section for about 5 minutes and then took a ten minute break while I picked up the pieces and carried them to a tarp in our backyard.  This would be the THIRD tarp in our backyard filled with debris.  Urgh. 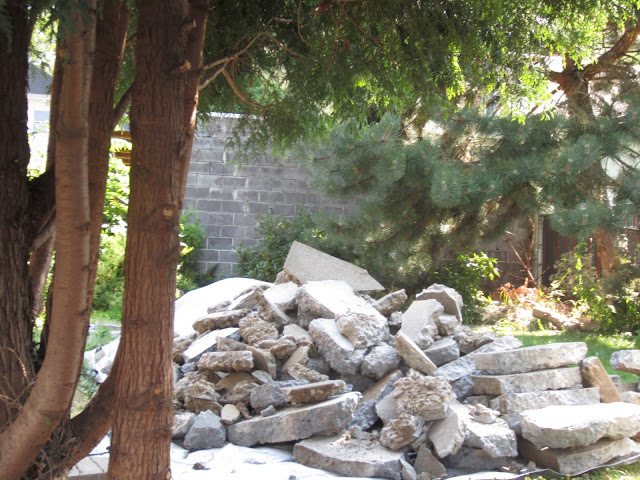 This system worked great and most of the concrete came up pretty easy.  Within one morning session we had successfully removed all the remaining concrete. Hurray.  Unfortunately, we were now left with a dirt wasteland from our car to the porch and a very intimidating concrete pile.  Honestly, I cannot imagine how much our neighbors hated our Saturday concrete removal. 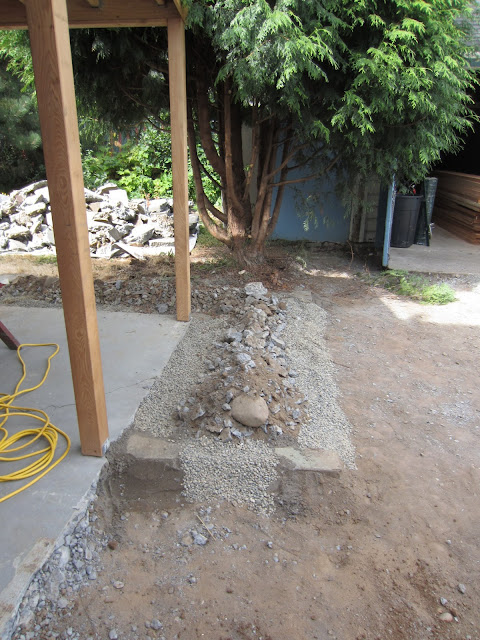 With the big equipment spent, we ordered more Western Red Cedar from the same guy who got us the wood for the front yard raised beds.  Our goal was for them to look as identical as possible.  We also had a bunch of left over wood we were excited to use up and get out of our garage.  While we waited for the wood to be delivered.  Josh leveled the area where they new raised beds would go.   He used some of our broken concrete pieces to act as a sturdy foundation and we spread pea gravel over the area to help make sure the wood would not be sitting directly on the wet earth.


By the end of the weekend there was not much to show for our hard work except more piles.  But freeing up all that soil for more planting space felt great and we were excited to move forward with the raised beds.

Posted by Taylor at 4:42 PM No comments: