May 2011
Our biggest wish for the house in 2011 was for it to look a lot better from the outside.  We were very lucky to have taken advantage of the home-buyers tax credit and when I filed my taxes in February the government sent me a check for $8,000.  We were itching to improve our little place with the money.  The biggest issue was going to be our long wish list and our not so impressive budget. 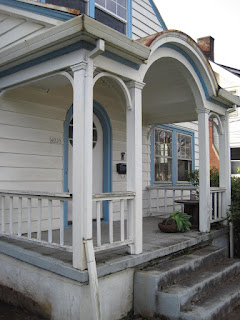 Wish List included:
1. Replace all windows that were not original to the house.  There was several reasons for this.  First, all the 'newer' windows were the worst culperts for drafts, inoperability and general frustration.  Second they were just plain ugly and did not go with the house.  The house currently boasted two alumium sliding windows from the 1970's (definitely not in keeping with the house) and some cheap 2006-2009 vinyl double hungs that were already leaking.
2. Remove 1970's 10" cedar siding that did not match the style of the house and made it look stumpy.  Replace with more correct cedar shingles or 5" cedar siding.
3.  Repair/replace trim around windows, doors and eaves that had been removed or damaged in the 1970's.
4. Replace 8' wide impossible to open or lock sliding glass door to the back porch.
5. Remove dangerous understructured and sagging back porch.
6. Install insulation in walls so our house could get above 60 degrees in the winter.
7. Repair original windows to former glory.
8. Paint whole house pretty colors!

Is that enough for you? It was enough for us to get quotes in the $30,000-40,000 range.  Gulp... not exactly what we were thinking. We needed it be less than half than that amount.  Amazingly, we were undetered and figured we should start and see how long we could make it until the money ran out.  We started with this list in December and moved forward. 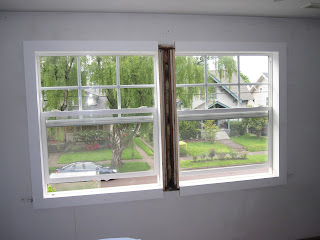 Our first step was to buy some of the new windows in 2010 so we could get a tax credit.  We decided to start with the ones that needed the most work.  The upper story windows on the front of the house had been replaced by the owner prior to the sale due to rot.  By the time we saw the house it had two short misproportioned vinyl double hungs in the master bedroom.  It truly made the house feel short and they were hard to open.  We had a feeling looking at some other similiar houses in Portland that the upper windows might have been casements instead of double-hungs. The double hungs just didn't seem to match.  And just as important we like casement windows better and felt it would give us a vertically currently lacking on the facade.

We wanted the windows to be wood, inside and outside.  I did not want alumium clad or vinyl wrapped, I wanted wood... like how all windows used to be made.  Apparently, this is not even an option anymore?  So, we had to custom order our windows.  Since we had a 7' opening upstairs we took a risk and assumed that between the existing two upper windows there was no structure and bought a Chicago style, simulated divided light, wood insert.  I can't show you a picture yet because it would spoil the reveals but o baby is this a beautiful window!

The next window we decided to replace was the staircase window.  This window was a 1970's alumium window that we opened everyday during the summer to let in the fresh air.  It had no screen (read BUGS) and looked horrible.  I wanted to get a double casement for the window but it was too narrow so we opted for a single large casement and matched the front windows. 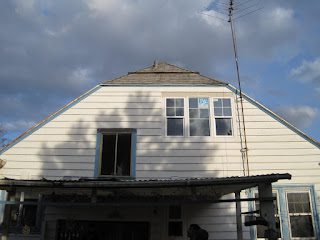 The last thing we purchased was a new set of French doors to replace the sliding glass door.  For those of you who have never purchased a French door, probably most of you, they are VERY expensive.  I am not exactly sure why a sliding door in the same size and material can cost 50% less... but it can.   But let's face it, you cannot put a sliding glass door in a 1920's house... So we sucked it up and custom ordered a solid wood divided light 6' French door for the back.  We picked the smaller size because we wanted to install a dog door for Gus so we could give him an option to see the world when we were at work.  More on that later...

We took a gulp and ran the credit card and set ourselves back about $4,500.  This budgeting was not going well.  (The good news is that the US government gave us $1,500 for the windows since they were so energy efficient, and Oregon gave us another $150 on top of that).  Still, we were gonna really have to pinch our pennies from here on out if anything else was going to happen on this house. 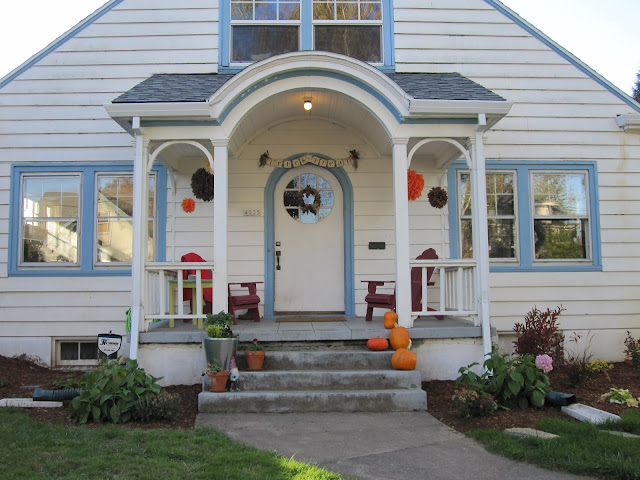