Weekend 4: We still needed to do some finishing work around the beds.   Our goals were to: install a walkway between the beds, make a small pad at the top, lay stepping stones to our front door and create a landscaped border around the beds to connect with our existing landscaping.  We ordered a yard of gravel and had it delivered on Saturday, we bought a bunch of ledger stones from Lowes and got ready to work. 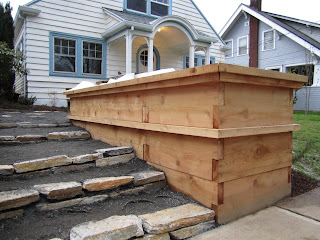 The first item on the agenda, was to install several steps on the pathway to navigate the elevation change from the sidewalk up to our house. This proved harder then we thought, all the ledger stones were different heights and widths, we played for several hours trying to get them to stack level and fit inside our pathway.  (Background we, by that I mean myself, wanted these stones because they were natural and would have a nice contrast against the very rigid angular raised beds).  In the end, I will admit this was not a good decision.  We probably should have bought stones that had been cut to standard sizes and that way we could have made the entire thing a little more even. Regrets... always...  We can always come back and replace them later, since the stones could be used anywhere. 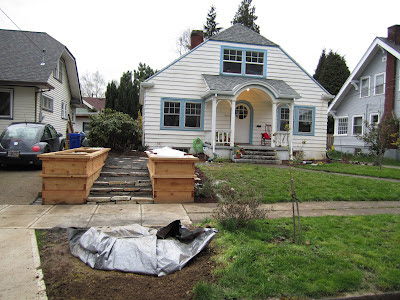 After mortaring (this is not a word) the stones into steps we covered the pathway in weed fabric and poured the gravel in.  We didn't rent a compactor so there was a lot of stomping involved in the process.  Up at the top we realized we were a little short on gravel.  We also realized we were going to need an edger to hold the gravel in place.  We decided to use some existing bricks we had found on the property.  Seriously, every time I dig anywhere I find a brick, weird right?   We also used some old flagstones to make up for the lack of gravel.  This was starting to become a disturbing trend to this project-- let's use all this random stuff we have lying around. 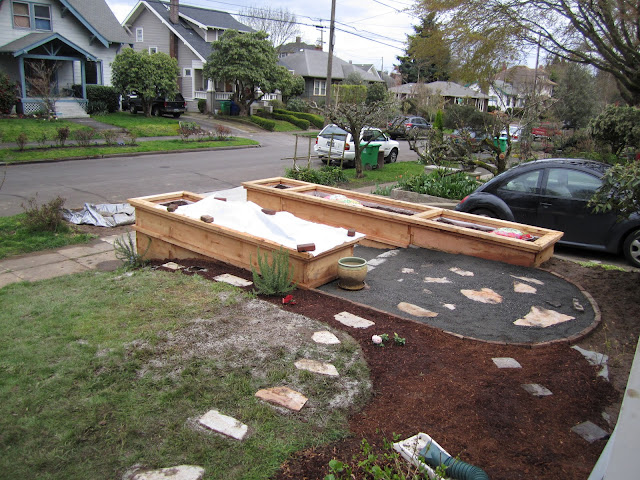 The final step was to soften it up a bit, we bought some lavender and rosemary bushes to put along the right bed.  I picked these because they attract natural pollinators (thanks for the book mom) and stay colorful year around.  We also installed stepping stones up to the front door and inside the landscaping areas to allow us to access both sides of the bed. A little bit of grass seed and we put some of our starts into the beds and called it a weekend. 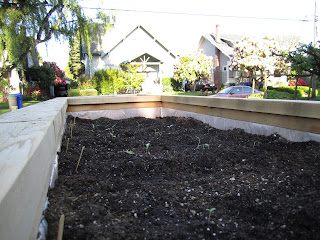 The moral of the story is this was a little rough.  After three weekends of dirt digging, building, dirt filling and compost hefting we were worn out.  I think the end result is still really successful and I love the beds, but I have a feeling in a year or so you will see another post about changes and upgrades we have made.
Posted by Taylor at 11:55 AM