It was time to make the final push to finish the porch. Unfortunately, I did not take any pictures of this push. We were so busy and it was such a blur it just kind of happened. The first weekend Josh started building the screens. Our friends Kristin and Kyle let us use their mitre saw so we could churn out all the cuts to make each of our frames. It became obvious very quickly that we underestimated the amount of trim this would take. We had a lot of 5-6' length pieces that left us with plenty of unusable 2-3' sections of wood. We drove back to Lowes and bought 20 more pieces of wood (another $150). We decided to paint 15 of them. So back in the basement we went painting the sticks. Josh and I shared the task but it was still maddening after painting 30 pieces already. 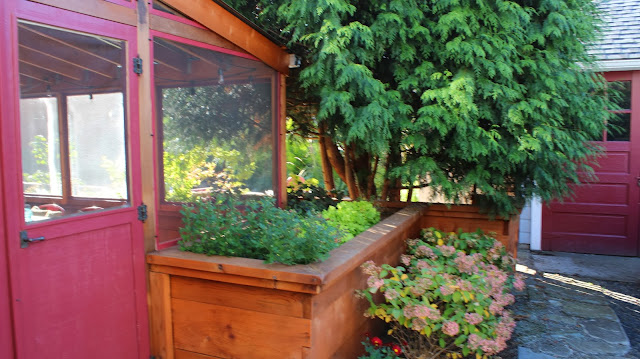 The actual building of frames was really a one person show. Josh mitred the corners and nailed them together with our brad nailer. I pretty much did other house stuff during this time. It was a frustrating task, since we had made the raised beds out of rough cut lumber there was very few level or plumb areas. Josh would measure, confirm the piece fit, cut it's mates nail the pieces together, and then... it wouldn't fit. Part of it was the thickness of the screens, part of it was the allowance for the fact that they didn't nail together super tight and this added some length to every edge. Either way, it was a slow process. I pretty much tried to help, and then tried to stay out of the way. 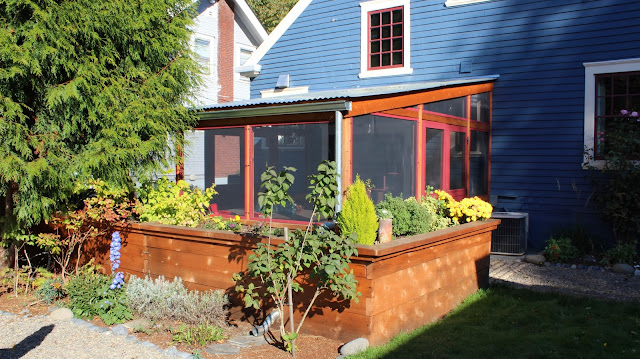 It took one full weekend and another Saturday to make the frames. On Sunday Josh banged out all the interior trim pieces on the openings and we were done with all the cutting. It was getting late so we had to add one more day to actually build the screens. The following Saturday I started rolling the screen material out, stapling it, and cutting to size. This was quick work, there was attention required to keep it taut and also not to cut yourself on the unfinished screen edges (seriously I need to wear gloves). We brad nailed the frames together and placed them in the openings.

Next we installed the screen clips, these are simple small black metal fins that screw into the porch frame to hold the screens tight. They can be spun to release the screens for when we want to clean them, repair them, or if we ever want to take them out. We chose to use 2-3 per side, the bottoms of all screens would use gravity to stay in place. Once they were all in, it looked pretty darn sharp. It was a marvel to see it all come together. Granted, we still needed to caulk some corners and touch up paint areas where we had to sand to make them fit. But, it was, for all useful purposes: DONE. Two summers, roughly 14 weekends and we had finished our screen porch! This was our biggest diy project to date, it showed a lot of our weaknesses, it proved that hiring a professional would have gotten things done so much faster. However, we learned a bunch, we probably broke even on costs, and we got a totally custom porch that was designed to work for our needs.

We had a few small steps left to fully enjoy our space. We called in our electrician to install a new ceiling fan/light and to move an outlet box to the ceiling so we could install string lights along the perimeter of the porch. We also needed to get some porch furniture so we could actually use our new found square footage. More to follow.....﻿ ﻿﻿﻿
﻿ ﻿ ﻿﻿﻿﻿