Probably the most incomplete room in our house was the master bedroom.  When we first bought the house the sheer size of the bedroom wow'ed us. It's about 17' long and about 14' wide, in modern bedroom standards this is probably a guest room, but for those of you who are old house owners you will know this is a huge bedroom.  That was about all it had going for it.

1.  There was no drywall on the entire North side of the room.  The studs were there, doing their job holding up the house, but not protecting us from our creepy eaves space.
2.  There was no trim in this room.  None.  No baseboards, no door trim, nada.  The wood floors stopped short of the walls and there was a nice empty crevice to collect dog hair and anything else that was swept to the side.
3.  The newer vinyl windows did not open properly and were not trimmed to match the house.  (We actually fixed this when we remodeled the outside, we installed a new working and style matching windows as well as new trim)

4. On the South side we had a weird slider door entrance to the shag den.  See earlier post.  (This was decontaminated and closed up)
5.  For some odd reason there was a large hole in the wall that showed the chimney stack.  I am not sure what this was for, maybe there was a leak?  Maybe they thought about exposing it? Either way it was ugly and dirty and served no purpose
6. There was one standard 4' closet for all of our clothes.
7. The existing ceiling fan was hideous and brass (we replaced this about a month prior, see earlier post)
8. There were two can lights??? (totally not in keeping with the house, but necessary for lighting purposes) that had no trim on them
9.  The walls were drywall not plaster and did not match the overall look of the rest of the house.

I really should stop now because you're getting the point.  It was bad, real bad.  We lived with this for 18 months.  It was starting to be not cool. The biggest hold up had actually been that we didn't exactly know what to do with the space. We knew we needed more closet space, we also knew we had a lot of space behind the stud wall, and in the creepy chimney recess to add some storage.  Josh and I are by no means carpenters.  If you have ever tried finish carpentry you will know what we mean, it is harder than it looks, and requires a good deal of precise cutting.  We didn't feel confident building in the storage and considering the unlevel, unusual sizes of our house we could not utilize off the shelf items.

The kick start finally came when we were walking Gus.  Each night Josh would run into this women with a large yellow lab mix.  Gus and Baxter liked to wrestle and play and so they often stopped to let the dogs duke it out.  Turns out after talking to her, her husband is a carpenter.  They live three blocks away and his workshop was in the neighborhood.  It was the moment we had been waiting for.  We asked him to come look at the areas before Christmas and give us an idea on pricing.  We drew some quick sketches of two closets in the eaves and a bookcase for the the chimney eaves.  We also asked him to install trim in the room to match our exisiting trim throughout the house. His prices were perfect, right in line with what we thought and his work was amazing! 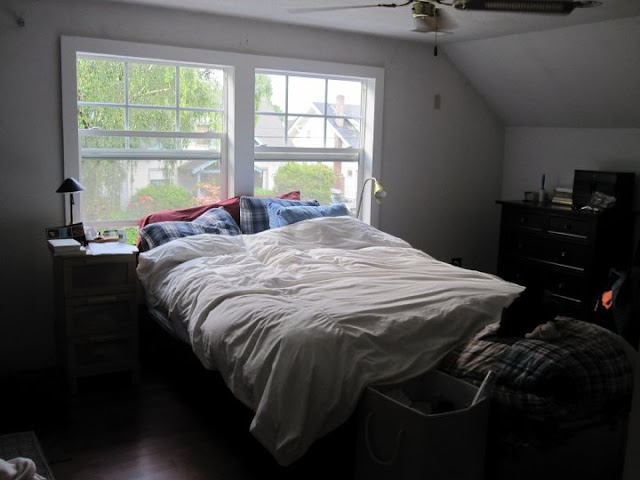 I was super excited to have a professional handmake things for our house.  It always amazes me to look at our house and think about the hours that went into making the panelled solid wood doors, the dining room built-in, the handmade kitchen cabinets. These weren't 'upgrades,'  they came standard on every house, because that was how you made them. I felt like this was the best way to go.  Pay someone in our own community to make beautiful things in the way they used to be made.  Respect your house, respect craftsman.  Buy local.  Buy Real.  It felt good.
Posted by Taylor at 4:31 PM